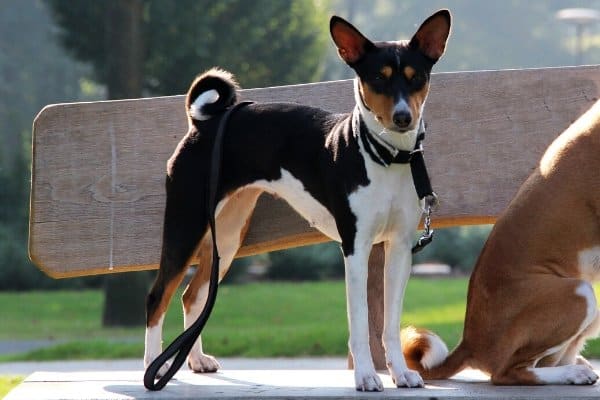 Originally from Africa, Basenjis are one of the oldest American Kennel Club (AKC) breeds. Ancient Egyptian artifacts feature Basenjis which were already a well-established breed at that time period and were often presented as gifts to pharaohs.

Basenjis were prized for their versatile hunting skills, superb vision and hearing, and the tendency to silently leap vertically into the air in order to spot game in the dense grasslands of their home territory.

In fact, one African name for the breed loosely translates to mean “the jumping up and down dog”.

What colors do Basenji dogs come in? The standard colors for Basenjis are red and white, black and white, tricolor, and brindle and white. Other colors such as cream and white or blue tricolor are possible and commonly occur in Basenjis from Africa but are currently still rare in the U.S.

The subject of coat color, regardless of breed, can be quite confusing.

We’ll do our best to keep things simple as we walk you through the standard Basenji colors and explain why most of the beautiful, natural, alternative colors have all but vanished in the domesticated Basenjis of today.

Although the AKC breed standards show no disqualifications for color, the four most common colors, red, black, tricolor, and brindle are considered to be standard.

However, dogs showing alternative colors can be registered, bred, and shown though might be given a fault for color in the show ring, depending on the judge.

Note: The white coloration for each of the standard colors should always cover the feet, chest, and tip of the tail.

A white blaze on the face, white legs, and a white collar on the neck area are all acceptable but not required. The coat should always consist of more color than white.

Red and white is the combination that usually comes to people’s minds when they think about a Basenji. Many Basenjis do show this beautiful coloration and within this coat color many shades are possible.

The red is described as being a deep chestnut red, rich and vibrant in saturation, though many people not familiar with the breed would likely describe it as orange, beige, or dark tan.

As with all the Basenji colors, the areas of color should be well defined and not “bleed” into the white at all. Stray colored hairs mixed with the white portion of the coat are undesirable. The white should be pure and brilliant white.

When two pure-for-red (meaning that they do not carry any other hidden color genes and are homozygous for the trait) dogs are bred, the puppies produced would also all be pure-for-red. 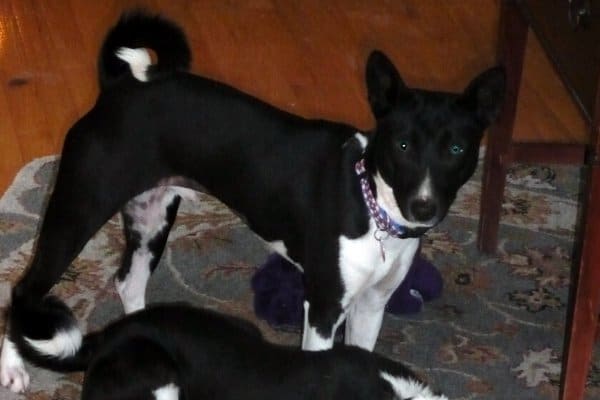 On Basenjis with black and white coloration, the white should be vivid and clearly defined while the black should be a glossy, deep, dark, pure black.

Note: Most black and white Basenjis are heterozygous for the trait, meaning that they carry a recessive color that was not expressed because of the dominance of black.

This interesting combination of color is lovely on a Basenji. The usual patches of white remain in place, but the rest of the coat is a beautiful deep black with additional chestnut red coloration usually found on the eyebrows, cheeks, inner portion of the upper legs, base of the ears, and the inner ear.

If you can picture the color pattern of a Rottweiler and add in the white Basenji patterns, you’ll have a better idea of what tri-colored Basenjis look like. Black, white, and tans are lovingly referred to as simply “tris” by Basenji aficionados. 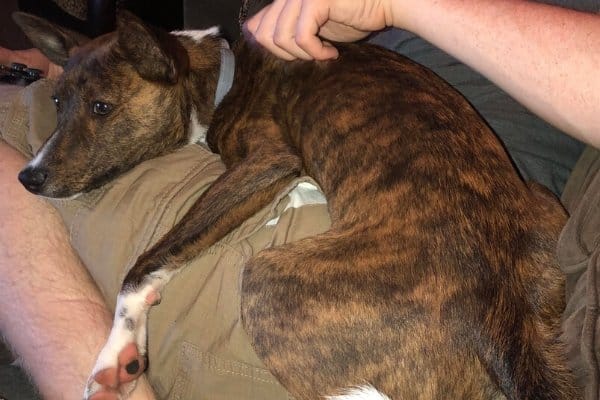 Basenjis with a brindle and white color pattern still have the usual white markings but instead of solid red markings, have clearly defined black stripes on the background of chestnut red.

Breeding two brindles or a brindle to a tri will produce both brindle puppies and red and whites pups. However, if two tri-factored brindles are bred, the litter could be expected to contain reds, brindles, tris, and trindles.

Fun Fact: Brindles only started appearing in America after a special importation project in the late 1980s.

The standard colors are undoubtedly the most commonly seen on purebred Basenjis with the exception of trindles which appear fairly often. Other alternative colors are perfectly acceptable but rarely seen today.

It is interesting to note that Basenjis living in Africa are commonly seen in these alternative colors and slowly, some of these dogs are being imported to the U.S. with the hopes of reviving these naturally occurring colors in American stock.

At this point in time, however, the Basenji Club of America only lists the standard colors for Basenjis, but the AKC does list the following colors as acceptable. Many members of both clubs would like to see these alternative colors become more common in the breed.

Black, Brindle, and White or Trindle

A black, brindle, and white Basenji is a tri-colored dog with brindle markings in place of the red and is often referred to as a trindle or a brindle-pointed tri, though for AKC showings dogs with this pattern would be considered to be tricolor.

Although some breeders do not care for this coloration, the Basenji Club of America reports that a trindle recently won the best-in-show title at an all-breed dog show.

Breeders with a preference for this pattern often breed a trindle to a tri, a tri-factored red, a black, or a tri-factored black to produce litters containing all of the standard colors with a few trindles mixed in.

In place of the chestnut red coloration, cream and white Basenjis, as you might guess, have a light cream to pale yellow color.

In the earliest imported Basenjis, cream and white was a common color pattern but breeders did not care for either the color or the pale nose leather and greenish eyes that came with it and selectively bred to eliminate the color and indeed were nearly successful.

Basenjis with this color pattern have a diluted black (called blue) blanket color with cream highlights in addition to the standard white patches. These variant tri-colored dogs resulted from tri-colored Basenjis who carried the cream gene, and thus they too began to disappear as early breeders worked to eradicate the cream color.

Mahogany and white Basenjis are much darker in color than typical red and white dogs due to the smattering of black hair within the red portion. This color pattern is so rare that few pictures depicting it exist, and those that do are unfortunately in black and white.

Basenjis labeled sable and white have the usual red and white pattern but the red hairs are tipped with black, giving the dog a totally different look. In Shiba Inus, this coloration is referred to as sesame.

The AKC allows for brindle markings, of course, but a black facial mask, black saddle over the rib cage and capped markings are also acceptable, though like the alternative colors, are not commonly seen.

Because there are no disqualifications for color, most quality Basenji breeders breed more for temperament, health, and conformation than for color. While some breeders may charge more for dogs with brindle markings than red or black dogs, most do not.

In reality, it costs just as much to produce and raise a highly desired colored puppy as it does for a pup showing a standard color. Breeders are well aware of this, but potential buyers may not be and will therefore gladly pay more for a brindle than they might for a red.

That said, it should be stated again that some of the alternative colors are somewhat undefined by breed standards and have nearly been eliminated from the gene pool in the U.S. thanks to the preferences of early breeders. These very rare colors would rightly come with a much higher price tag.