Although many people think of them as a new breed of dog, they’ve actually been around for a couple of decades.

Goldendoodles are an excellent choice whether a dog owner’s goal is to have a service animal, show dog, therapy dog, companion dog, or a family pet.

They’re a wonderful breed of dog that only continues to become more popular every year they’re in existence.

When describing the Goldendoodle, one could never say they’re all created equal, or “if you’ve seen one, you’ve seen them all” because each Goldendoodle is unique in not just personality but color and pattern as well.

Colors and patterns are a big part of what gives each Goldendoodle their particular look.  These are probably two of the questions most frequently asked by potential Goldendoodle owners.  So we figured we would lay it out for you in one place.

If you’re as big a fan of Goldendoodles as we are and are considering adding one to your family, you’ll want a comprehensive guide to walk you through every step of your journey.

The Owner’s Guide to the Perfect Goldendoodle is chock full of practical advice and accurate information, answering all your questions in a straight-forward manner.

Take the guesswork out of raising your Goldendoodle with this 75+ page guidebook that details everything you’ll need to confidently raise your dream Doodle.

It’s the only book you’ll need – the one you turn to again and again. Pick up your copy today!

With a name like Goldendoodle, one might think that gold is the only color they come in, but nothing could be further from the truth!

With the Poodle heritage and the Golden Retriever heritage both in play here, it’s not surprising that Goldendoodles come in so many colors and patterns.

The Poodle and Golden Retriever ancestry both bring apricot, red, and cream to the mix.

The same gene controls all three of these colors, but the intensity of the inherited gene is what determines the shade of the color.

Poodles also bring dark brown (chocolate), black, gray, and silver, as well as the patterns, to the mix. So the summary of colors from both Poodle and Golden Retriever is:

Personally, I like the Apricot shade. It’s a light tan, sort of teddy bear color.

I’m biased though because there is a Goldendoodle puppy named Sadie in our training class, and she’s just ridiculously cute. Full disclosure – I say that about all puppies.

What Do Different Color Patterns Mean? How Do They Come About?

The color a puppy is born with is often a matter of chance, but it can also be determined by heredity. Experienced breeders can even mix certain dams and sires together to get a certain color litter.

Different color patterns are created not just by using a dog with a certain base coat but also through generational breeding (you’ll find an in-depth explanation of generations here).

Since black is the dominant gene, and chocolate is the recessive gene, the dog only needs one copy of the black gene to be a black dog but needs two chocolate genes to be a chocolate dog.

Golden Retrievers rarely have a chocolate gene, so it’s rare to get a chocolate Goldendoodle unless an F1b or higher generation dog is used in the breeding.

This 75+ page book is jam-packed with expert knowledge and real experiences from Goldendoodle owners and breeders alike. Consider this the ultimate owner’s guide for the breed with tips, tricks, and answers to the most frequently asked questions – saving you time, money, and loads of frustration along the way. 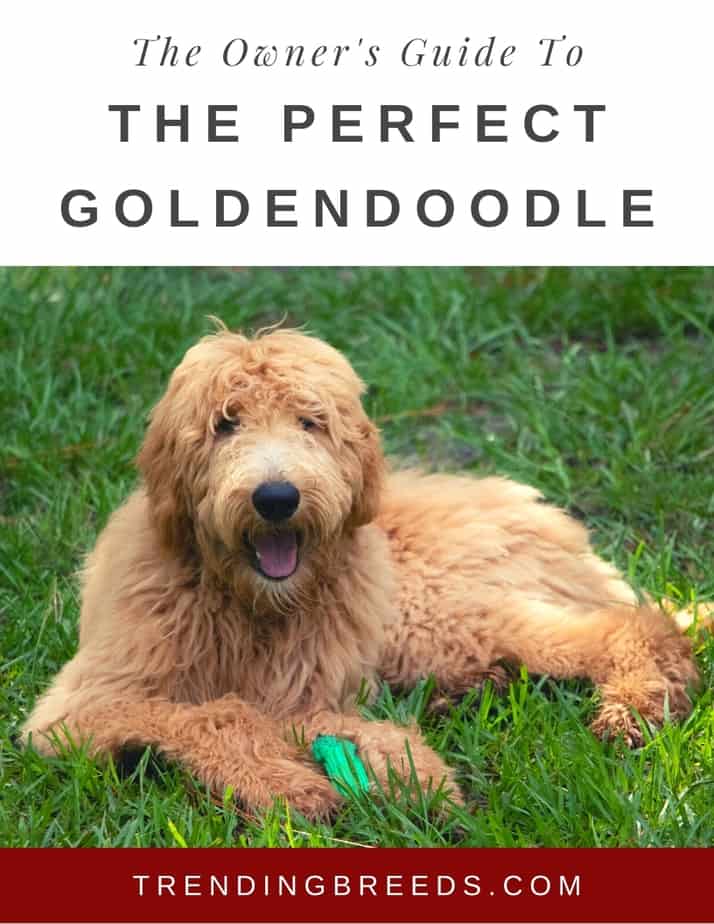 Get Your Copy Today!
Learn More

An F1b is created by mixing an F1 (50% Poodle and 50% Golden Retriever) with a Poodle. Chocolate carrying Golden Retrievers are so rare that when they are found, they’re often not purebred.

Here is a better description of the different patterns.

Genes play the biggest role in the dog’s coat color.

Another example of this can be found with the phantom pattern. The phantom design is only found on a solid chocolate or solid black dog.

While the dog may have a cream on chocolate coat or an apricot on black coat, you will not see a phantom pattern on a Goldendoodle that’s in the apricot spectrum of colors.

Which Colors Are the Most Popular?

It’s almost difficult to determine which colors are the most popular because to see one of these beautiful Goldendoodles in any color is to fall in love with one.

Because there are so many colors and color combinations, many actually ask, “Can Goldendoodles be black?” Surprising as this may be, black is the most common color for Goldendoodles.

Because black Goldendoodles are so common, they are often available at a lower price. While they may be popular in terms of price, they are the least favorite in terms of color choice.

(How much can you expect to pay for a Goldendoodle? Find the answer here.)

The apricot Goldendoodle is the most popular color choice with cream being second and red in third place.

A sable Goldendoodle is also popular. Sable is a gene that gives the dog’s coat an appearance of two tones or colors with the tips of the coat being black.

The tips on the dog’s body will fade as the dog gets older, but the dog may still have black tips on the legs and ears.

Which Colors Are Hard to Find?

The Merle Goldendoodle is the perfect example.

Because of the possibility of deafness or blindness, this is a hard color to find because generally only experienced breeders work with the merle genes and only after extensive genetic testing.

A gene that randomly suppresses or disperses only some of the solid color is what creates the merle color. The blue Goldendoodle, often in merle pattern, is often very hard to find.

It’s very rare for a Goldendoodle to carry the true red gene because red is usually a diluted form of black.

You need two red parents to get a red puppy, so red Goldendoodles are hard to find and somewhat rare.

It’s been said that there are only a few breeders in the world with dogs that carry the true red bloodline.

Buyers who encounter breeders claiming to have rare color Goldendoodles should be cautious. This may be the result of an inexperienced breeder mixing different colors without regard to health hazards or risks.

Love Goldendoodles? Want to learn more? We have 30+ articles devoted to this awesome breed full of info and helpful tips. Access them all here.

About the only exception is black coats, which don’t generally lighten until the dog gets older and gets white hair from being older.

Do Goldendoodles have a puppy coat?

Yes, like most other breeds of dogs, Goldendoodles are born with a soft, furry coat that stays with them until they’re about six months of age, at which time they get an adult coat that is thicker and stiffer.

It’s at this time, when the dog gets its adult coat, that the coat begins to develop a color and pattern of its own.

While the coat is transitioning, you need to be extra diligent in your grooming practices to prevent painful mats from forming.

Be sure to go over the coat thoroughly with both a slicker brush (this self-cleaning brush is perfect) and a stainless steel comb at least every few days.

Read more about the puppy coat and how it will change as the dog matures in this article.

Keep in mind that your best chance of raising the ideal companion is to equip yourself with knowledge and know-how from the very beginning.

We show you exactly what to do, step-by-step, in The Owner’s Guide to the Perfect Goldendoodle – the most complete Goldendoodle book available. Grab your copy today!