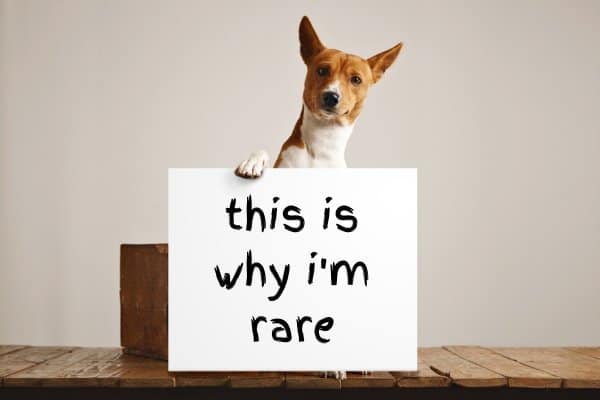 It’s easy to become instantly enamored with the expressive face and cat-like tendencies of the Basenji breed. Relatively small at around 23 pounds, with a distinctive “barrooooo” sound and other vocalizations (but no barking) and an independent spirit coupled with keen intelligence, there’s a lot to love about this breed.

However, many prospective buyers are disappointed when they search for available puppies. Sure, finding a list of Basenji breeders is simple, but when you start contacting breeders, there are no puppies available.

To top it off, many times future litters are already spoken for, and waiting lists are already full and have an expected wait time of at least one year, often more.

Why are Basenjis rare? Basenjis are rather uncommon due to several contributing factors. A female only comes into heat once per year and the resulting litter, if she is bred, is usually already spoken for. There are also few Basenji breeders and many do not breed every year.

Like you, we were curious as to why Basenjis seem to be so rare and puppies so hard to secure. After some research, we discovered several reasons why purchasing a Basenji can be difficult and why you don’t see them very often.

In fact, many people have never even heard of a Basenji and when you mention this interesting breed, you’re often met with blank stares and peppered with questions. Here are the answers that we found that explain why Basenjis are less common than other breeds.

The #1 Reason Basenjis Can Be Hard to Find

Basenjis are an all-around unique breed. They developed as a breed naturally in the wild…they have an inability to produce a normal “bark,”….they’re known to be destructive when bored or not sufficiently exercised.

Basenjis have special quirks that endear them to their devoted fans.

One major difference between Basenjis and other breeds is the natural breeding cycle.

Most female dogs come into season (also called heat or estrus) twice per year, though small breeds may experience a heat three or even four times a year and larger breeds may only come into season once every 12 months. Near the end of estrus, the female will be receptive to breeding and can readily become pregnant.

Basenjis, however, typically come into season only once per year, usually in the late summer or early fall. Pregnancy lasts for approximately nine weeks, and most Basenji pups are born between October and December.

Basenji litters are usually not very large, typically averaging between five and seven puppies each. So if a breeder has just one breeding female, only a handful of puppies will be produced each year, and they’re often are already spoken for before conception even takes place.

Fun Fact: The Tibetan Mastiff and the New Guinea Singing Dog have breeding cycles similar to the Basenji and also typically produce only one litter per year in the early winter months.

Quality Basenji breeders are always striving to improve the breed by working to correct issues with temperament, eliminating genetic diseases, and only breeding dogs who strictly adhere to breed standards.

Most reputable breeders are active in the show circuit in some way, and their main objective in breeding is to produce show-quality dogs to supplement or replace their stock. The best pups from a litter are often kept or sold to other breeders.

Additionally, many breeders don’t breed every year. They choose to wait until they are in need of show or breeding animals or until homes for all possible puppies are already secured.

With small litter sizes, infrequent breedings, and show- and breeder – quality dogs in high demand, many times only two or three puppies are left to be sold as pets from each litter.

In fact, the breeder’s quality should be severely doubted if he or she consistently has puppies available. This is often a sign of a puppy mill disguised as a breeder, and you should look elsewhere for a puppy.

A quick Google search for Labrador Retriever breeders in, for example, Texas yields an astounding 14 pages (not listings, but pages of listings) of results. That doesn’t even include breeders without a website or club affiliation.

On the other hand, when you search for Basenji breeders in Texas, the first page of results only lists two authentic breeding kennels, the Basenji Club of America (which does have a small list of approved breeders organized by state), and the usual assortment of online puppy sales pages like Puppy Purebred and PuppyFind.com.

The choices for a reputable breeder are indeed slim and vastly different from what you would expect with the more common breeds.

They Are Not the Right Breed for Everyone

Although Basenjis hold the 87th position of the American Kennel Club’s popularity ranking, they’re not wildly popular due their personality quirks and yes, their rarity.

After learning of the Basenji’s Houdini-like artistry…

…propensity to become destructive if not exercised enough physically and mentally, and their occasionally (or frequent) disregard to commands if the command doesn’t mesh with their current agenda, many people choose another breed.

Are Basenjis terrible pets? Absolutely not.

Granted, they won’t be great for an inexperienced owner, those who are rarely at home, or those lacking in patience and a deep understanding of the breed.

However, for owners who have researched the breed, are prepared to spend time properly training their dog, have great patience, and are dedicated to ensuring that their dog’s mental stimulation and physical activity needs are met daily, a Basenji can be a wonderful, affectionate family pet.

Breeders know that if a large number of Basenji puppies are produced annually, many will wind up in homes that are ill-equipped to handle them correctly and therefore intentionally don’t breed very often.

Tips for Purchasing a Basenji

Before beginning your search for a Basenji puppy, prepare yourself for a long wait time to avoid disappointment when you can’t locate one right away.

Also know that you may need to travel, perhaps even out of state, to the closest breeder. Here are some more tips to help.

Basenjis are wonderful dogs full of personality, energy, and love, but they’re not right for everyone. Research the Basenji’s temperament, need for socialization and correct training, exercise and mental stimulation requirements, etc. before finalizing your decision.

Bringing home a puppy who winds up not being a good fit can be heart-breaking for you, and isn’t fair to the puppy who most likely will be rehomed.

Knowing that Basenjis only have one litter per year at most and that there’s likely already a waiting list for the next litter, it’s wise to contact your selected breeder and ask to be placed on their waiting list as soon as you’re sure that a Basenji is right for you.

Be prepared to fill out a puppy application and to provide all your contact information. The breeder should “interview” you to make certain that you are indeed ready and able to provide a permanent, loving home for a puppy.

Special Note: Most reputable breeders will not require a deposit to be placed on a puppy until after the litter has arrived. Be wary of any breeders who demand money the instant you express any interest.

Locating a quality breeder isn’t always easy. Sometimes the best way to find one is to actually go to a dog show that will feature Basenjis or to a canine sporting event like lure coursing.

Be polite and wait until after the event before approaching a Basenji owner. Ask them if they could recommend a quality breeder and leave your contact information with them to pass along to other breeders. You might be surprised at how quickly you get results.

Inquire About Purchasing a Young Adult or Retired Breeder

Sometimes breeders will have older dogs whom they’re ready to part with due to them not meeting breed standards or being retired from the breeder program. It can’t hurt to ask, and even if one breeder says no, he or she may know of someone else to put you in contact with.

Basenjis are sometimes found in various rescue groups or placed up for adoption by their owners. Sites like Petfinder, Adopt-a-Pet.com, and Rescue Me! are great places to start.

Also check the Basenji Club of America and Basenji Rescue and Transport for listings of Basenjis in need of a new home.

6 thoughts on “The Truth Behind the Basenji’s ‘Rare’ Status”