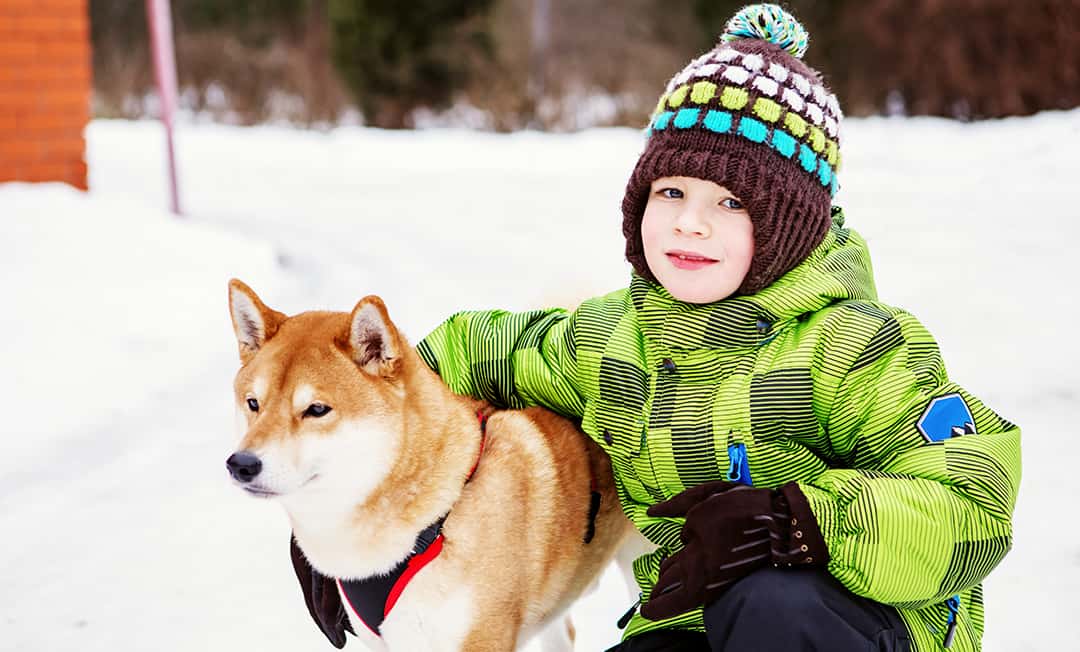 Dating as far back as 300 B.C., Shiba Inus are considered to be a primitive breed, retaining many characteristics of their ancestors. Their independent spirit and fox-like appearance have earned them legendary status in Japan and caused them to quickly gain popularity in America as well, especially in recent years.

Is a Shiba Inu a good family dog? As long as the family knows exactly what to expect from the breed, is dedicated to proper training and socialization, and shows the children how to behave with a dog and rightly interpret the dog’s cues, a Shiba Inu can be an excellent family dog.

Shiba’s are often called “cat like” for their temperament. As I’m writing this I’ve just sat down after a short walk. On the walk I met a woman who had a Shiba Inu out for a bit of exercise! This Shiba was very polite and friendly, she sat and let me pet her. Even gave me her paw 🙂  Such a beautiful dog, they really are striking. Her name was Olivia.

Are you curious what it is exactly that makes this breed so special and unique? Let’s take a quick look at a few of Shiba Inu’s characteristics, quirks, and issues to be aware of.

Loyal, yet aloof. Loving, yet not overly affectionate. Good-natured, but can be aggressive. Playful, yet dignified. Shiba Inus possess a rich, complex personality full of seemingly conflicting and unique quirks that have endeared the breed to the hearts of many for thousands of years.

Of course, not all Shiba Inus strictly adhere to the general temperament characteristics, but broadly speaking, most share similar personality traits. Keep in mind that factors such as genetics, socialization, and the manner in which the dog was raised can contribute to and influence a dog’s individual personality.

Shiba Inus are indeed loyal dogs who bond closely with their owners. They do, however, tend to be somewhat aloof and independent. They do not crave attention or depend heavily on human interaction. Because of this, they are often described as being cat-like in nature.

While Shiba Inus do love their owners, they are more likely to display love by being faithful than by being affectionate. Most Shiba Inus do not care all that much for being picked up or snuggled. They may tolerate being occasionally petted, but they will walk away when they have had enough.

When well-bred, properly socialized and raised in a loving environment, most Shiba Inus are easy-going, good-natured companions (be sure to check out our complete socialization guide). However, they are possessive of their belongings and may show aggression when defending what they deem to be theirs.

It should be noted that Shiba Inus often do not get along well with other dogs, especially dogs of the same sex. Care should be taken when introducing a Shiba Inu to any new dog as aggressive behavior might rear its ugly head as the Shiba Inu attempts to prove that he is boss.

Shiba Inus have retained a very strong prey drive from their hunting background and will not hesitate to chase any little furry creature, so they might not be suited for households with small pets. They are rather notorious for the ability to escape the confines of an average yard and disappear, so extra precautions must be taken.

Unless incredibly well trained, a Shiba Inu should always be on a leash when out and about. When allowed off leash they often will take off, oblivious to any commands.

Shiba Inus do like to play, and a variety of toys, including puzzle toys, will help to fulfill the breed’s need for mental stimulation. These intelligent dogs can sometimes resort to destructive behavior if not given frequent outlets for their mental abilities.

The confident, bold, free-thinking Shiba Inu can admittedly be a challenge to train. They are not nearly as eager to please as other breeds are, so praise-based training will not be very effective. They do tend to be food-motivated, so rewards of tasty treats might be a better option.

Obedience classes early in your pup’s life are highly recommended to get you and your Shiba Inu started on the right track and to prevent any major issues (like aggression) from popping up later.

Are Shiba Inus Good With Older And Younger Children?

Generally, older children and Shiba Inus get along quite well, provided that the children have been taught how to behave around dogs and how to properly interpret a dog’s body language. In typical Shiba Inu style, they will often just get up and walk away when they have had enough.

If a Shiba Inu has grown up in the presence of children, they will most likely have formed a strong bond with them and will actively protect them should the need arise.

Young children are still busy actively exploring the world around them and figuring out how things work. What parent hasn’t caught their child attempting to poke a finger into a dog’s eye, nose, or eh, elsewhere?

The majority of Shiba Inus simply will not tolerate being subjected to any indignities such as finger exploration, hair pulling, ear or tail grabbing, or loud squeals of delight in their ear. Some may simply move away from the child, but others may display aggressive behavior.

Although some Shiba Inu are very patient and forgiving of small children, the risk of injury to either dog or child is always present. Shiba Inu are generally not recommended for families with young children.

Children should always be closely supervised when interacting with any dog, regardless of breed.

Puppies are, as a rule, absolutely adorable. If you have ever experienced their needle-like teeth sinking into your tender flesh though, you know raising a puppy is not all fun and games. There are always issues that need correcting, and training and socialization must be a priority. This applies even more so to Shiba Inus.

Because this breed can be prone to aggression issues, nipping improper behaviors in the bud is imperative. A critical period of learning takes place between the ages of two to four months, so owners must be extra diligent with correcting any problem behaviors during this time.

While a little puppy jumping up to greet people is cute, your opinion is bound to change when that puppy becomes fully grown and routinely still jumps all over people. This behavior can be scary for those who are not used to dogs and can even be dangerous if children are the ones being jumped on.

Jumping on people can also be indicative of the dog attempting to assert dominance. This should in no way be tolerated, especially with a Shiba Inu. It is very important that this breed understand from an early age that people are indeed in charge, not the other way around.

All puppies undergo the process of shedding their puppy teeth as the permanent teeth emerge from the gums. To alleviate the discomfort, puppies often chew on inappropriate objects such as table legs, couch cushions, or fingers. Of course there are better options, but it is up to you to provide them and to teach the puppy what is okay and what is not. Try offering:

Other common puppy issues are nipping and outright biting. Puppies, just like children, often like to test their limits, and as with children, puppies need discipline. Nipping and biting can quickly escalate into serious trouble as puppies become adults and must be dealt with immediately.

One rather important aspect of raising a puppy is housebreaking. Fortunately, because Shiba Inu prefer to keep themselves clean, this is a relatively easy task, often accomplished in just a few days.

How big do Shiba Inus get?

The American Kennel Club specifies that Shiba Inu males should reach a height of 14.5 – 16.5 inches tall at the withers and weigh approximately 23 pounds. The slightly smaller females should be between 13.5 – 15.5 inches and weigh close to 17 pounds.

Does a Shiba Inu make a good watchdog?

Yes. A Shiba Inu tends to be protective of his perceived “possessions” such as toys, food, territory, and yes, his family. The breed’s excellent hearing, ability to intuitively sense imminent danger, and innate wariness of strangers enable them to function quite well as dependable watchdogs.