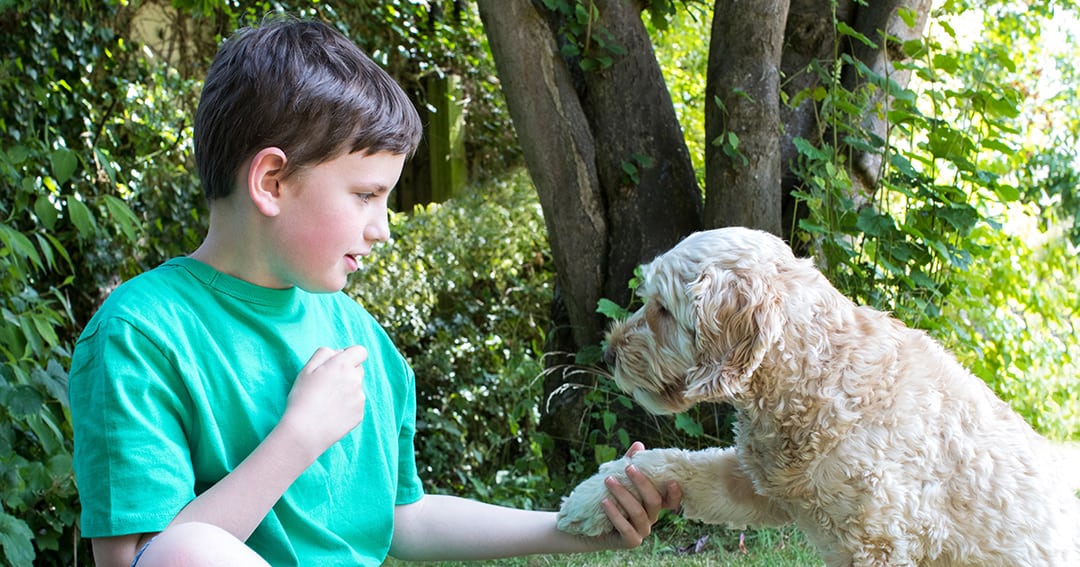 One of the reasons so many families have loved bringing the Cockapoo into their home is because of their friendly and loving nature. Cockapoos are a breed of dog that lets you know just how much they love you. They’ll keep you closely monitored and don’t think twice about claiming your lap as their own.

Bred from a Poodle and an American Cocker Spaniel, the Cockapoo has been filling homes with love and delight since the 1960s. Because of its traditional use as a family dog, you may be wondering if the Cockapoo is right for your family that contains small kids and other pets.

Are Cockapoos a good family dog? Are they good with kids? Yes, Cockapoos are great for families with small children and other pets. Their friendly and loving nature makes them an excellent choice as a family dog. Like all dogs, however, proper training and socialization are needed to make them the best companions possible for family members of all ages.

While they are loving and kind, Cockapoos are just like any other dog. They can be energetic and rambunctious with a tendency to jump on people when they get overly excited.

So while the answer is YES they are good family dogs, you should understand what you’ll need to do to get them well adjusted to family life.

One of the primary reasons that people buy Cockapoos is because of their friendly and easygoing nature. It’s common for them to believe that everyone they meet is a friend. They’re not always shy and prefer instead to run up to someone new to greet them. This great temperament is perfect for those who want a family dog. They need a dog who can fit in with an existing family unit seamlessly and be a friend to all.

The activity level of a Cockapoo is another aspect that makes it a great family dog. Cockapoos only have a moderate level of activity. That means that while they do like to play outside, they don’t contain the same amount of energy as many other dogs. Cockapoos typically only need around 15 minutes of exercise a day. Families who are quite busy can fit that into their schedules easily. Cockapoos, while playful, love to cuddle and snuggle up with their family members after playing outside.

Their personalities are wonderful additions to the family as well. Some are more playful than others. Some are even mischievous. However, each has its own cute personality that family members can’t help but love.

One last trait of the Cockapoo is their intelligence. Because the Poodle is an extremely smart dog, the Cockapoo inherits some of that intelligence. That makes them easy to train. When it comes to obedience and behavioral training, you’ll find that the Cockapoo can give you a lot less trouble in learning than other dog breeds.

That all being said, great behavior begins with early training. When they’re a puppy, Cockapoos will exhibit behavior similar to any other curious and excited puppy. They might jump on people to greet them, nip during play, or have accidents throughout the house. It’s important to understand that this is just part of being a puppy. However, you can take a few actions to help them outgrow the behavior sooner rather than later.

In terms of jumping, especially in the case of smaller children, it can sometimes be dangerous. Standard sized Cockapoos, for example, can still knock a small child down and potentially hurt them. For those who want to stop their dog from jumping on people, begin when they’re a puppy. Keep them leashed and have someone enter the room. The dog should be taught to sit when someone new enters the room. Reward them generously with praise and treats when they make improvements.

In terms of biting and nipping, these are typical forms of play for puppies. They don’t realize how hard they’re biting just yet. One way to teach them that they’re playing too hard is to make a yelping noise. This loud sound surprises them and informs them that they’re biting too hard. You can also distract them with chew toys to play with instead of fingers and toes. Puppies need to chew as their adult teeth come in, so having chew toys can help them.

Families who have small children are likely more concerned as to whether or not a Cockapoo is a good family addition. All puppies grow, so if you want to your Cockapoo to be small (even as your children grow up, then you might want to purchase a Cockapoo that comes from a Toy Poodle crossing. These are tiny little guys who can’t cause too much havoc due to their tiny size. Once your children are older, you can always choose a larger sized Cockapoo to join the family, too.

Cockapoos love small children. They love, essentially, every person. Small children can actually be great in terms of helping the Cockapoo receive their daily exercise requirement. The two can play together in the backyard and wear one another out.

Are Cockapoos Good With Other Dogs?

Since Cockapoos are so friendly, they also extend that friendliness towards other dogs. For families who have other dogs in the household, you might be more worried about how your current dog will react to the Cockapoo. The Cockapoo will want to play with the new dog and become their best friend. Despite the Cockapoos smaller size, they also love to play right alongside bigger dogs, too. It’s as if they don’t have a concept for size!

To ensure that your household is safe for two dogs, you should introduce the two outside of the home. That way the Cockapoo can get to know the older dog without invading its territory. Through a slow and careful introduction, your two dogs should get on splendidly.

Are Cockapoos Ok With Cats?

Cockapoos are generally friendly towards cats. To them, the cat is likely just another oddly-formed friend. Though there are some cats that are better suited to get along with Cockapoos than other cats. Because Cockapoos are playful, it’s a better match if the cat is also playful. Then the two can play together amicably. Otherwise, the Cockapoo might want to play with the cat, and the cat won’t want to have anything to do with the dog.

A slow introduction to the cat is also a great idea for ensuring the household is amicable. The Cockapoo should first be crated in the home. Allow the cat and dog to meet one another while the dog is kennelled. In this way, the dog is able to satisfy their curiosity about the cat and keep from fixating on it. Smaller Cockapoos also pose less of a risk with cats. Smaller Cockapoos can do less damage.

What Real Owners Are Saying…

“I’ve had my cockapoo, Ollie, for a little over two years and my life has been so much better ever since! He changes the way he approaches people depending on who they are. For example, when kids approach him, he sits and bows his head so as to show that he isn’t threatening.”

“10 month old Cockapoo owner here. He is great with young children, never bites or plays too rough. The only issue can be when he first greets them he can sometimes try and lick their face. Not dangerous but causes discomfort to shy children.”

“I cannot recommend them enough, they are loving, playful and great with children, my 10 and 12 year old are perfect companions.”

“Cockapoos are great family dogs because they are gentle and patient with children. My dog loves to be around them especially. “

What games can I play with my Cockapoo?

Because they sometimes have a lot of energy, Cockapoos love to play fetch. However, you won’t catch them playing for a long time. They have bursts of energy and are then quite happy to relax with you in the home. Other games that you might like to introduce your Cockapoo to are hide and seek and the three-cup game.

Are Cockapoos good at nose games?

Because the Cockapoo contains the American Cocker Spaniel, they have a keen sense of smell. Cocker Spaniels were often used as hunting dogs. Cockapoos have inherited this ability to track a scent. As such, they can make for a great choice to enter in nose game competitions that allow designer dog breeds into their game.