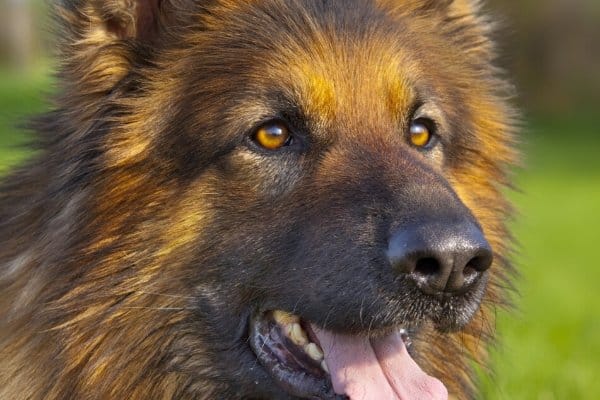 With a purebred dog, you know what to expect in terms of appearance, temperament, and health issues. A mixed breed’s characteristics, however, aren’t always as predictable.

Because two separate breeds contribute to the mix, there’s plenty of variety possible, and that’s exactly what makes the Golden Shepherd, so fascinating and desirable.

Here’s a quick look at what you can expect.

What Is a Golden Shepherd?

The Golden Shepherd is a crossbreed resulting from two recognized breeds: the Golden Retriever and the German Shepherd.

Though little is known about their earliest history, this adorable mix has been steadily gaining popularity for more than a decade.

As a mixed breed, Golden Shepherds aren’t recognized by major clubs such as the American Kennel Club (AKC).

They can, however, be registered with the Designer Breed Registry and similar organizations and may even compete in AKC events through the Canine Partners program.

To understand a Golden Shepherd and predict traits such as personality, it’s important to look at the two contributing parent breeds.

Golden Retrievers were developed in Scotland in the late 1800s to be rugged gundogs.

Currently third in popularity rankings, Goldens are cherished companion pets. However, they also excel working in search and rescue, as assistance animals, and in various detection work.

Held in high regard for their unsurpassed temperament, Golden Retrievers are excellent family dogs and are quite intelligent and easy to train.

Goldens have well-muscled bodies, deep chests, and broad heads with friendly faces and expressive, round eyes.

The luxurious double coat is long with feathering on much of the body. Golden Retriever coat color can range from a very light golden color to a deep, rich gold.

Often confused with the equally impressive Belgian Malinois, the German Shepherd Dog (GSD for short) was originally created to herd flocks of sheep in Germany in the late 1800s and early 1900s.

Today, GSDs are America’s second most popular breed. These versatile dogs are used in a variety of service roles including:

GSDs are noted for their courage, loyalty, dignity, and superb intelligence.

Considered one of the easiest breeds to train, a GSD not only learns new commands and skills quickly but retains the new knowledge easily, interprets instructions accurately, and can be counted on to obey reliably.

For more detailed information, be sure to read our article on German Shepherd training.

Standing between 22 and 26 inches tall and weighing 50 to 90 pounds, the GSD is a large breed with plenty of energy.

They’ll do best when raised with the family and feel that they have a job to do.

A German Shepherd has a dense, coarse double coat, upright ears, a bushy tail, and a muscular body with a gently sloping back, giving the rear quarters a crouched look.

The head is angular with a long muzzle and dark, almond-shaped eyes.

Although they’re typically black and tan, acceptable colors for a GSD include blue, gray, liver, sable, white, and black – either solid black or with cream, red, or silver.

Most Golden Shepherds you run across will be first-generation (F1), meaning that the parents were a purebred Golden Retriever and a purebred GSD.

Currently, other generations aren’t very common with this mixed breed, but they certainly are possible and would serve to reinforce certain desirable traits.

If an F1 mix were bred to either a purebred Golden Retriever or GSD, the puppies would be F1B generation, with the “B” standing for backcross.

Now, if two F1 mixes were bred together, the resulting pups would be called an F2 generation, but as we mentioned, these crosses aren’t usually done.

A Golden Shepherd may look like a Golden Retriever with Shepherd markings or a German Shepherd with a golden coat, though more than likely, they’ll fall somewhere in between the two.

You can expect a large, muscular dog with certain features from each parent.

The ears may be folded, stand rigidly upright, or stand only partially erect. The eyes are usually dark brown, intelligent looking, and expressive.

Because both parents have deep chests and sturdy, well-proportioned bodies, you can expect the same in their puppies.

With both parent breeds having a thick double coat, the same will be true of their offspring, though the texture and length can vary quite a bit.

It may closely resemble the long, soft coat of a Golden Retriever or the dense, stiff, medium-length coat of a GSD. Then again, it may be a totally unique combination.

Some Golden Shepherds may be light to dark gold while others may have GSD colors.

Still, others may have a wild combination of both. Even puppies from the same litter often exhibit different colors.

As you might expect, the most common colors seen in this mixed breed are gold and the black-and-tan combo.

Typically, a Golden Shepherd will reach 21 to 26 inches in height and weigh between 50 and 80 pounds, depending on the parent’s size.

This means that males tend to be taller, heavier, stronger, and masculine in appearance while the females have a more delicate build and feminine features.

Depending on which breed is more heavily reflected in your Golden Shepherd, you may notice these differences too.

Temperament can be largely shaped by the manner in which a puppy is raised and socialization techniques employed, but overall, this mix should have a friendly, affectionate, eager-to-please nature.

Courage, confidence, and loyalty will be defining characteristics as will playfulness, intelligence, and a zest for life.

Aggression shouldn’t be an issue when reared properly, but most Golden Shepherds will have a protective quality to their temperament.

These dogs love to be around people and may suffer from separation anxiety if left alone for long stretches.

Are They Easy to Train?

Yes! Because of the intelligence, alertness, and people-pleasing aspect of both parent breeds, the Golden Shepherd shouldn’t have trouble when it comes to training.

Lots of positive reinforcement and some yummy treats for motivation are all it really takes.

This crossbreed is an excellent family dog.

With a deep love of people from Golden Retrievers and a loyal, protective nature from German Shepherds, the Golden Shepherd is the perfect combination of affectionate companion and dutiful watchdog.

One thing to keep in mind is that German Shepherds tend to form an extra-close bond with their main caretaker and are often called one-person dogs for this reason.

Depending on which parent’s traits your dog inherits, this may be an issue.

However, as long as each family member participates in the dog’s daily care, engages with him through one-on-one playtime, and showers him with plenty of love and snuggles, a Golden Shepherd will form a strong, loving relationship with everyone in the family.

Are They Good With Kids?

Most Golden Shepherds get along fabulously with children. They’ll form close bonds easily and have no trouble keeping up with active kids during playtime.

From outside playtime to relaxing in the front of the TV and everything in between, a Golden Shepherd will be up for it.

Although supervision is a must with any dog around small children, Golden Shepherds should be great four-legged-buddies for children of all ages.

Due to the protective nature of their German Shepherd background, this mixed breed will likely be a vigilant guardian and courageous protector of all family members including children.

Training is essential to prevent their protective instincts from becoming obsessive.

Do Golden Shepherds Get Along With Other Animals?

Provided that the dog was properly socialized when young, a Golden Shepherd should get along well with fellow household pets and other dogs he meets when out in public.

However, keep in mind that German Shepherds often have a high prey drive, so depending on which parent breed had more influence, a Golden Shepherd may have a strong urge to chase small animals.

To some degree, raising techniques and proper socialization practices may stifle this instinct.

Mixed breed dogs are generally healthy, but they can inherit genetic conditions from either parent.

Both Golden Retrievers and German Shepherds are prone to hip and elbow dysplasia, several eye disorders, and cardiac conditions, so be sure that your vet is aware of your dog’s background and will periodically check for common disorders.

A well-cared-for Golden Shepherd with no major health complications can be expected to live anywhere from 9 and 12 years though some may surpass the 14-year mark.

Of course, factors such as diet, exercise, and genetics can affect those numbers.

That’s why it’s so important to purchase your pup from a responsible breeder and make sure your dog lives a healthy lifestyle with nourishing meals and plenty of exercise.

Like all dogs, golden Shepherds will need routine care of their nails, ears, teeth, and coat and will need regular checkups and vaccinations.

Do Golden Shepherds Shed Much?

Get your pin and bristle brush and undercoat rake ready because yes, these dogs do shed moderately year-round and heavily in the spring and fall.

Thorough, frequent brushing will keep the shedding manageable, so don’t let the thought of fur tumbleweeds dissuade you from getting one of these amazing dogs.

There’s no doubt that Golden Shepherds will be active dogs, full of energy well into their golden years. Plan on at least two exercise sessions per day, about 30 minutes each.

Forms of exercise can include invigorating walks, jogging, running along beside your bicycle, hiking, swimming, and backyard games like fetch, which is bound to be a favorite thanks to their Retriever background.

Both parent breeds were created to perform a specific job and are very smart, so exercising your Golden Shepherd’s mind will be critical to prevent boredom and related destructive behaviors.

The options are endless, but if you need some fresh ideas, check our Guide to Mental Stimulation.

When adult size is reached around 18 months, transition to a respected adult formula for large breeds, and feed according to package instructions.