As of January 1, 2020, two new breeds can now proudly boast official recognition by the American Kennel Club. The Barbet and the Dogo Argentino have joined the ranks of 193 other recognized breeds and may now compete in their respective groups.

The Barbet has been given Sporting Group designation and the Dogo Argentino is the newest member of the Working Group.

For the Barbet, this recognition has been a long time coming. This French breed was originally bred to be a waterfowl hunting companion and dates back to at least the 1500s. Barbets are included in the ancestry of Poodles, Griffons, Newfoundlands, and Bichons, to name a few.

The Dogo Argentino, comparatively, is much newer, having been developed in the 1920s primarily as a fighting dog. Fortunately, the breed’s creator, Dr. Antonio Nores Martinez, soon recognized his dogs’ adeptness for hunting large game such as mountain lions and wild boars, and the breed’s fighting days were over.

The Process of Breed Recognition by the AKC

The AKC doesn’t officially recognize a breed based merely on popularity, trendiness, or even the proven ability to breed true (produce offspring who consistently look nearly identical to their parents).

Rather, a protocol must be followed, a practice that typically takes years to complete. Although the path to recognition isn’t an easy one, owners, breeders, and fans of the breed feel that the effort and time put forth is well worth it when the coveted status of official recognition is finally achieved.

In order to qualify for AKC recognition consideration, an organized national breed club must first be established. The club must keep the end goal in mind and steadily make progress toward recognition by holding matches, specialty shows, judges workshops, and breed seminars.

Additionally, the breed may be registered with the AKC Foundation Stock Service (FSS). In order to be eligible for the FSS, the national breed club must submit a formal request, a history of the breed, and breed standards.

The next step on the road to recognition requires a written request from the breed club to compete in the Miscellaneous Class. The AKC Board of Directors bases their decision on the following criteria:

Once approved to compete in the Miscellaneous Class, dogs usually remain there for one to three years during which the AKC will track the number of dogs, litters, and competing dogs.

If all of the criteria set by the AKC have been met, the breed will be presented for full recognition.

Now that you know how much work goes into elevating a breed to full AKC recognition after years of selective breeding, you can see why fans of the Barbet and Dogo Argentino are so thrilled. Let’s take a quick look at these latest recognized breeds. 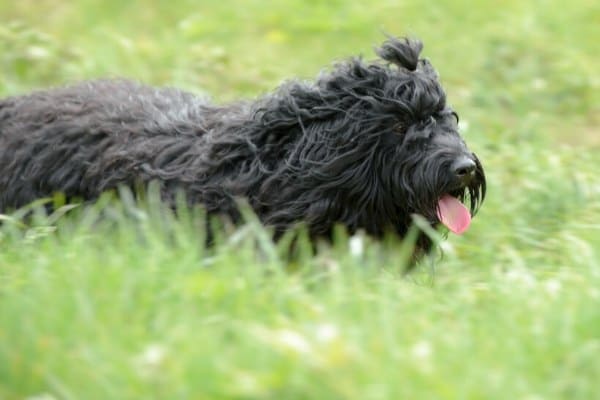 The Barbet, pronounced “Bar – bay”, is a sturdy, medium-sized dog with a large, broad head, distinctive beard, and a long, curved tail. The most prominent feature is the dense, woolly, curly coat that comes in all shades of black, brown, gray, and fawn either with or without white markings. Pied (mostly white with markings in any of the accepted colors) is also acceptable.

Male Barbets should be 21 – 24 ½ inches tall at the withers. Females are usually slightly shorter at 19 – 22 ½ inches. Barbets can weigh between 35 – 65 pounds and will be slightly longer than they are tall.

Barbets are friendly, cheerful, sweet-natured dogs with a unique zest for life. Loving and loyal, Barbets are smart and highly trainable but won’t do well with boring, repetitive drills or harsh corrections. He’ll learn new tricks and commands easily with gentle, consistent training.

Barbets are sociable dogs and usually get along well with other household pets as long as they’ve been properly socialized. Most Barbets are naturally gentle with children and will have no trouble bonding with each family member.

The Dogo Argentino is the very picture of strength, power, and athleticism. A stocky head, thick neck, and muscular, body coupled with a keen intellect and great courage make this breed an ideal hunter of big game and a loyal protector of the family.

Both male and female Dogos should stand about 25 inches tall at the shoulder and weigh between 88 – 100 pounds. The coat is short, sleek, and solid white in color, though a small black or dark-colored patch on the head is permissible.

Despite their aggressive hunting skills, Dogo Argentinos are affectionate, friendly, and extremely loyal to their families. They are confident and sometimes strong-willed, so aren’t recommended for novice owners, but when raised correctly, are gentle with children and protective of the entire family.

Dogos have a high prey drive and are known to be territorial. Therefore, they often do best with an experienced handler in homes that don’t have small pets. These energetic dogs require plenty of daily exercise, mental stimulation, and frequent contact with people. Early socialization is critical to this powerful breed.

We talk a lot about dogs here. Many of which are purebred AKC recognized and others who are beautiful crossbreeds. Of the AKC recognized breeds we’ve covered, here are some of our favorites.