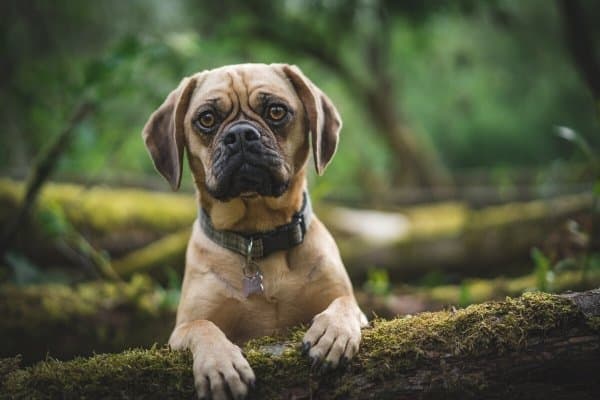 If you are considering a Puggle, you may be wondering whether this is a dog that you’ll be able to take to the dog park or for strolls around your neighborhood comfortably. Here’s what you need to know about how Pugs and Beagles relate to other dogs and what that means about how your Puggle is likely to behave.

Learn everything that you need to know about how Pugs and Beagles relate to other dogs and how this reflects on the behavior and personality of your Puggle.

Temperament of a Puggle

Because Puggles are not an established AKC registered breed and because most Puggles are the result of first-generation breeding between a Pug and a Beagle, the best way to understand a Puggle’s temperament is by understanding the temperament of both parent breeds.

The Pug is a small but sturdy dog who is up for anything. They seem to have no comprehension of how small they are, and are not too delicate for some rough and tumble play. In general, the Pug approaches life with a “Whimsical demeanor”  which is incredibly charming.

Pugs are extremely attached to their humans and may become jealous or possessive of you. They are also extremely food motivated. It is entirely possible for a Pug to pick a fight with another dog who they view as being competition for your affection or who they think may try to steal their food.

Some Pugs are more friendly than others, but in general, they are friendly or at least tolerant of other dogs, provided those other dogs don’t try to take their person or food.

Temperament of a Beagle

Beagles were bred to live and work in packs. As such, they are some of the most dog-friendly dogs that you are likely to find. Beagles tended to run very closely in a pack, but they rarely have arguments.

Historically, most Beagles have been kept in kennels with many other dogs in between hunts. It is extremely unusual for a Beagle to be aggressive with other dogs.

Furthermore, Beagles tend to have excellent dog sense. They are likely to understand when another dog is communicating to them that they should back off and they tend to understand the difference between a dog at play and a dog who is threatening them.

Beagles are extremely food motivated, and those dogs which are most dedicated to their treats may be willing to fight with another dog over their food.

Temperament of a Puggle

Based on the personalities of their two parents, you can expect most Puggles to get along well with other dogs. Even if they take mostly after the Pug, you can expect a dog who is unlikely to pick a fight.

For the most part, your Puggle will get along well with other dogs in your home and when you meet them out on walks and at the dog park. Here are a few exceptions that you should be wary of.

Food is one of the few things that a Pug may be willing to initiate a fight over, and even the good-natured Beagle may not tolerate someone trying to take their beloved food, so there is a good chance that you may see some food aggression directed towards other animals in your Puggle.

Always feed your Puggle separately from other pets and don’t allow your Puggle to have high-value treats, chews, other things that they associate with food when other dogs are around them.

Pugs adore their people and are known to occasionally show aggression to other dogs who they think may be stealing their human’s affection. You may also see this trait in your Puggle.

If your dog never lets you out of your sight, and especially if you notice them doing things like using their body to block other dogs from getting to you, you may have a jealous Puggle on your hands. Be sure to never let your Pug guard you from other dogs and make sure to always balance the attention that you give out equally.

When you combine a Pug’s unwillingness to back down from anything, including a fight, and the Beagle’s tendency to be oblivious to anything when they are following their nose, you may end up with a recipe for a dog that offends other dogs.

If your Puggle stumbles into another dog or blunders into their territory and are corrected, they may be unwilling to back down from the fight that they have unintentionally started, even if it is a fight that they are going to lose.

Carefully monitor your Puggle when they are playing with other dogs to make sure that they don’t offend someone and get themselves hurt.

Here are some things to look for in both dogs.

How to Handle Unplanned Encounters

You are walking your Puggle along, enjoying a pleasant stroll, when suddenly out of nowhere a dog appears, off-leash and coming towards you. What do you do?

Deciding what to do in the instant before an unknown dog gets to you can be extremely difficult. Should you pick up your Puggle and try to run away? Should you try to scare the strange dog off? There’s no guaranteed right answer. What is best in one situation may not be the best in the next.

Here are a few things to keep in mind.

Picking up your Puggle may make it more likely that the dog will attack.

By picking up your Puggle, you may end up making your dog more desirable to the approaching dog. This will certainly cause anxiety for your dog, who is more likely to react fearfully or aggressively, which may also cause a negative reaction in the other dog.

Unless it is clear that picking up your Puggle is the only way to keep them safe from the other dog, another tactic may be better

Running away makes it more likely that the dog will chase you and that they may be triggered to attack. It is also very unlikely that you and your Puggle will be able to outrun a dog who is chasing you down.

Rather than running, hold your ground and stamp aggressively towards the dog if it attempts to approach closely. This may be more likely to make the dog respect you and keep its distance.

It is sometimes easier to grab the other dog.

Rather than trying to keep your Puggle away from the approaching dog, it may be easier to grab the other dog and keep it away from your Puggle. This is especially true if the dog is wearing a collar or dragging a leash.

If a dog is persistently bothering you and your Puggle and you are afraid that it will hurt your Puggle, consider taking off your Puggles leash if you don’t have any other leash and tie the dog to something until you can get your Puggle to safety.

Read our guide on how to handle being approached by a loose dog.

What should I do if my Puggle is bitten?

If another dog has bitten your Puggle and isn’t letting go, it is very natural for you to feel panicky. However, the best thing to do is to remain calm. Instead of trying to pull your Puggle away from the other dog, firmly grasp the other dog by the collar or the scruff of their neck and push them towards your dog.

This often eliminates the pull which is encouraging the dog to keep holding on and causes it to let go. If this doesn’t work, you may need to use a stick to put between the dog’s teeth and get it to let go of your dog.

Throughout the process, the goal is to keep the dog from ripping and causing more damage and prevent it from regripping closer to something important like your dog’s throat.

What can I do if my Puggle doesn’t get along with other dogs?

If you want your dog to get along with other dogs or are worried that they are fearful and would be happier if they liked other dogs, you can enlist the help of a behaviorist or begin exposing your dog to other dogs at very low thresholds, such as from a distance, always while providing lots of positive reinforcement.

Over time, your dog will begin to associate other dogs with treats and affection instead of fear.