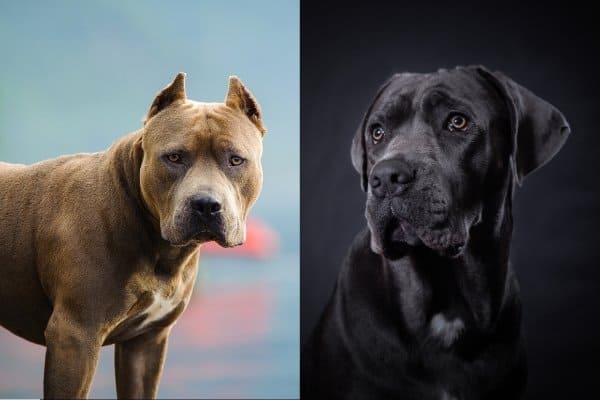 With well over 300 dog breeds worldwide, a bit of confusion as to who is related to whom is inevitable. Sadly, much information about the origins of certain breeds has been lost over time, further adding to the confusion. So, what about two popular breeds, the Cane Corso and the Pit Bull?

Are Cane Corsi and Pit Bulls Related? They are distantly related in that both breeds, like all domestic dogs, can claim the wolf as a common ancestor. However, Cane Corsi were developed from Italian Molossers while Pit Bulls were created from Bulldogs and Terriers.

Let’s take a closer look at these two breeds and investigate their similarities and differences.

Yes and no. It depends on what exactly you mean by the term “related.”

Yes, both Cane Corsi and Pit Bulls are domestic dogs, can interbreed and produce fertile offspring, and are direct descendants of the wolf. So, in that regard, yes, the two breeds are related, as all domestic dogs are.

Fun fact: In 1993, the classification of dogs was changed from Canis familiaris (a separate species) to Canis lupus familiaris, a subspecies of the wolf, to clearly show the ancestral relationship between the two.

Now, if by “related” you are wondering if Cane Corsi and Pit Bulls have other common ancestors in their lineage, the answer is no, they aren’t related in that regard.

Let’s take a brief look at the history of both breeds so you’ll have a better understanding of why they’re indeed two very distinct breeds.

The Cane Corso is a Mastiff-type Molosser breed. First of all, what is a Molosser? The term “Molosser” comes from the Molosssi, an ancient Greek tribe from Epirus, a vicinity that was once part of northwestern Greece.

The Molossi are credited with raising large, heavy boned guard dogs. These formidable dogs were used in war, as guardians, and were known for being fierce, courageous, and incredibly loyal.

The Molossi are said to have kept two distinct types of dogs. One was primarily used for guarding property and was dark in color for concealment at night. The other type was lighter in color to blend in with the flocks and herds they protected.

When the region was invaded and occupied by the Roman Empire, some of these massive dogs were shipped to Italy where they were interbred with native Italian breeds. The result of this interbreeding gave rise to the ancestors of today’s Cane Corso and another large Molosser, the Neopolitan Mastiff.

The Romans refined the Cane Corso (also known as the Italian Mastiff) and used these brave dogs extensively in battle.

Due to the fall of the Roman Empire, and later, the first and second World Wars, by the middle of the 20th century, Cane Corsi neared extinction. Thanks to the efforts of devoted breed enthusiasts, some specimens were located in the rural Italian countryside and selective breeding programs restored the numbers.

Cane Corsi were first introduced to the United States in 1988 and received full breed recognition by the American Kennel Club (AKC) in 2010.

Back in the days of cruel “sports” like bull and bear-baiting in England, participants realized that they could produce more agile, faster, and courageous dogs by breeding Old English Bull Dogs to various Terriers.

When the baiting of large animals was outlawed in 1835, rat baiting became the next new craze. For each competing dog, a prescribed number of rats was released into a pit, and the dog was expected to kill as many rats as possible in one minute. Now you know where the Pit Bull name came from – rat pits and Bulldogs.

Inevitably, the rat pits soon evolved into dogfighting arenas and further breeding of Bulldogs and Terriers continued until features like temperament and body type became standard. The first Pit Bulls were known as Staffordshire Bull Terriers.

Now, is it possible that at some point, a Mastiff- or Molosser-type dog was brought to England and used in the creation of the Old English Bulldog? Maybe, but no evidence exists to support this theory, so it appears that today’s Pit Bulls have no common ancestor with the Cane Corso, other than the wolf of course.

Are Pit Bulls Molossers Too?

Well, it depends on whom you ask. Some classify Pit Bulls as Molossers due to the big boned, bulky frame and large head. Others, the AKC included, categorize Pit Bull breeds as part of the Terrier group.

Today’s Molosser dogs are known for:

Most Pit Bull-type dogs do fit the above description more or less, but usually aren’t nearly as massive as definite Molosser breeds like the Cane Corso. You’ll have to decide for yourself whether or not a Pit Bull is truly a Molosser while the debate rages on.

Cane Corsi and Pit Bulls both have an impressive appearance with large, blocky heads; strong, well-muscled bodies; and wide, powerful jaws. The stiff, glossy coat on both breeds is short, easy to maintain, and comes in many colors.

Both breeds are gentle with their families, protective and alert by nature, and good with children as long as they’ve been thoroughly socialized and trained. Both may, however, have a strong prey drive and may or may not get along with other animals. Proper socialization is critical.

Cane Corsi and Pit Bulls differ in many ways. One is the pride of Italy; the other traces his roots to England. The two breeds were both bred to perform certain jobs, but the Cane Corso was created mainly to be a guardian while the Pit Bull was originally bred to out-perform other dogs in blood sports while remaining an affectionate, gentle family companion.

The mature Cane Corso is a serious-minded, dignified protector giving little value to frivolous play while the Pit Bull is a happy-go-lucky dog who’s always ready for fun.

Cane Corsi are typically quite reserved with strangers and don’t go out of their way to either seek attention from or lavish affection on their owners. They are calm in demeanor, quiet by nature, and generally laid back. They will require intense socialization and a dedicated training approach.

Pit Bulls, on the other hand, adore attention and affection, train easily, and are more likely to assume that a stranger is a potential friend than a threat.

The two breeds differ in size and appearance as well. Cane Corsi can be as tall as 27 ½ inches and weigh more than 120 pounds. Pit Bulls are usually smaller at around 21 inches tall and a weight of less than 60 pounds.

Cane Corsi possess a more wrinkled face with longer flews (cheeks and upper lips) than a Pit Bull and the eyes aren’t quite as wide set. While the coat of both breeds is short and glossy, Cane Corsi will grow a thick undercoat in the winter, and the texture is often described as being similar to that of a cow.

Bite strength (also called bite force) refers to the amount of force an animal is capable of producing with his jaws and is commonly measured in pounds per square inch, psi for short.

A Cane Corso is said to have a bite strength of 700 psi, more than twice that of Rottweilers. On the other hand, a Pit Bull typically tops out at around 235 psi.

To put your mind at ease, dog attacks on humans are rare, and most occur out of defensiveness, like when a dog is beaten or witnesses an attack on his owner. And remember, most of the time, a dog won’t use his full bite force unless he’s fighting for his or his owner’s life.