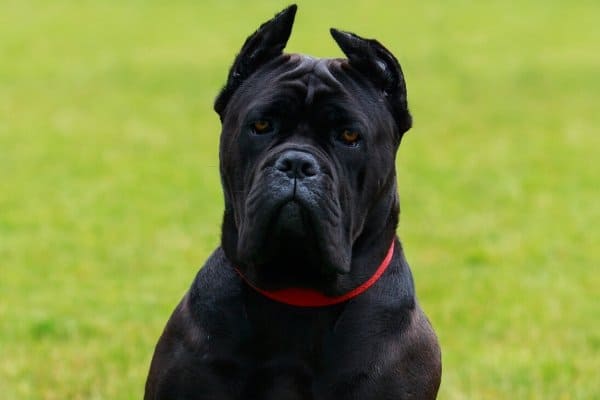 Since the early days of humankind, myths, rumors, and legends have abounded. Some may have a grain of truth in them at first but quickly morph into tall tales which are rapidly circulated.

Surely you’ve heard that some dogs are able to lock their jaws closed at will and keep them that way until they are pried open with a “break” stick. What about Cane Corsi? Is the jaw locking story fact or fiction?

Do Cane Corsi have the ability to lock their jaws? No. There are no physical mechanisms in a Cane Corso’s jaw to allow the jaws to lock together in place. If they are provoked, threatened, attacked, or sense danger when acting as guard dogs, they can, however, bite down with an incredible force of 700 psi.

If you are considering getting a Cane Corso, it’s important to know what you can expect from the breed as far as temperament, size, quirks, grooming, drooling, and health are concerned.

It’s equally important to know what not to expect from this beautiful breed. Here is what you need to know about the so-called ability to lock their jaws.

All About the “Locking Jaw” Myth

Although whenever the phrase “locking jaws” is mentioned it is usually in reference to a Pit Bull-type breed like an American Staffordshire Terrier, the term is also often thrown around in regards to Rottweilers, German Shepherds, Doberman Pinschers, Boxers, Bulldogs, and Mastiff breeds such as the Cane Corso.

Though the exact origin of the term is not known, many think that it may have been coined by dogfighters boasting of a win and bragging about how their dog really “locked on” to the opponent.

Over time, as many legends do, the myth of a dog’s ability to lock their jaws grew to epic proportions and many breeds now have an undeserved bad reputation because of it.

The “locking jaws” terminology could also have come about, or at least been used more frequently, during the late 1900s when Pit Bull-type dogs began to receive negative, sensationalized publicity which would later result in countless numbers of innocent dogs being put to death.

So, what does the term “locking jaws” refer to exactly? It is based on the assumption that dogs with large, blocky heads and wide, strong jaws are capable of biting down on a target and fixing their jaws firmly in place, thereby “locking” onto their prey.

It is said that when a dog’s jaws lock into place, it is nearly impossible to free whatever is clasped by the teeth until the dog sees fit to let go.

Cane Corsi admittedly do have an intimidating appearance to those not familiar with the breed. With massive heads, muscular bodies, and cropped ears, this breed could scare away an intruder with looks alone.

As far as latching on to a victim and locking their jaws in place though, it’s just not possible.

No dog has the physical mechanisms or ability to lock their upper and lower jaws together.

Can a Cane Corso hold onto something tightly with his jaws? Yes. Just try winning a game of tug-of-war against one and you’ll see what we mean. In fact, it is this ability that allowed dogs of long ago to fend for and feed themselves. Feral canines today are still quite capable of catching their own meals if need be.

But the ability to physically lock their jaws in place is nothing more than a myth born out of ignorance and fear.

It has often been said that there is no such thing as a bad dog, only bad owners. While there is some truth there, the statement is not entirely accurate.

Every dog is unique, with different fears, personalities, thresholds, and triggers. To make a blanket statement about all dogs of a particular breed in regards to being dangerous would actually mean very little. Too many variables, such as genetics, upbringing, and circumstances, are at play.

The truth is that any dog, regardless of breed, can be dangerous. Even a little Chihuahua can inflict considerable damage if push comes to shove.

That said, the hype about Cane Corsi being one of the most dangerous breeds is unfounded and inaccurate. Generally, they are quiet, composed, calm dogs with incredible intelligence, dignity, and loyalty to their families.

If bred from parents with stable, even temperaments, are correctly socialized from a young age, and are raised with equal amounts of respect, training, and boundaries, Cane Corsi should not be dangerous.

An exception might be if you happen to be an intruder, and after breaking into someone’s home, you suddenly find yourself face-to-face with a Cane Corso on high alert and not in the best of moods. Then, you might consider this dog to be dangerous, but this situation would be entirely your fault and you would deserve what’s coming to you.

Under normal circumstances, a Cane Corso is not dangerous by nature, but a dog in the wrong hands can be trained to be dangerous and even attack on command. Of course, in these cases, the dog would not be to blame.

To sum it up, a Cane Corso is a powerful, well-muscled dog with the capacity to do a lot of damage if he so chooses. Should the need arise, a Cane Corso is, “somewhat more ready to fight than to flee,” when confronted with a threat, according to the Cane Corso Association of America. That is what makes them such excellent guard dogs.

Generally though, instead of being aggressive towards people or other animals, a Cane Corso will act indifferently or show definite wariness. This breed can be confident, self-assertive, stand-offish with strangers, and determined by nature, but the word dangerous should not be used as a breed description.

Cane Corsi are said to have a bite force of 700 pounds per square inch (psi). That’s pretty impressive in the dog world. To give you a basis for comparison, consider the following average bite forces (all given in psi):

Now you can see why the Cane Corso’s bite force is so impressive. It’s a far cry from that of a crocodile or hippo, but not too far from that of a Grizzly. That says a lot.

Of course, a Cane Corso will not exert that much pressure every time that he closes his jaws. It certainly doesn’t require that much force to chew up kibble or hold a ball in his mouth. The bite force values given speak of only the capability to produce that much force.

Generally, dogs with large, broad heads and wide jaws will have a much greater bite force than breeds that aren’t as bulky and massive. This is nature at work here. In the wild, larger canines would naturally go after larger prey to satisfy their hunger and would need strong jaws to not only capture and kill their prey but also to efficiently chew their meal.

Selective breeding during the development of the Cane Corso also played a role in giving these dogs powerful jaws. After all, a guard dog isn’t much use if he isn’t intimidating in appearance and capable of actually inflicting harm if need be, right?

When Do Cane Corsi Become Protective?

You should begin to notice your Cane Corso start to exhibit protective behavior anytime between the ages of 6 – 14 months. During this time period, both sexes will begin to feel the effects of hormones and start to show more maturity.

Keep in mind, however, that this is also the time that a dog’s second fear period usually takes place. It’s perfectly normal for a dog this age to act brave and protective one day only to be scared of his own shadow the next. With time, this odd behavior will even out and he’ll begin to develop a characteristic Cane Corso temperament.