Hailing from Scotland’s beautiful Western Highlands, the Cairn Terrier is a small, robust, brave, and loyal breed that dates back to at least the 1600s. Like most Terriers, this plucky dog was once used to help rid farms and the surrounding countryside of vermin such as rats.

Today, the Cairn Terrier is an active, alert, and playful companion and does best when treated as a full-fledged member of the family and allowed to stay in close contact with those he loves.

Are Cairn Terriers hypoallergenic? Yes, Cairn Terriers are considered to be a hypoallergenic breed and tend not to produce a reaction in those with allergies. Though every dog is different, most Cairns are low shedding, do not produce much dander and are generally low maintenance.

Could a Cairn Terrier be right for you? Keep reading to learn about the breed’s hypoallergenic qualities, coat, and grooming needs.

Are Cairn Terriers Good for People With Allergies?

First things first. All dogs do shed to some degree, even those routinely described as non-shedding, like the Poodle. Shedding is the natural, necessary process of the coat ridding itself of old, worn-out hair so that it can be replaced with fresh, new growth.

As dead skin cells flake off, they cling to the dog’s hair and then are released, along with hair, into the air and scattered throughout the house when the dog scratches, shakes himself or sheds loose hair.

Dogs are self-grooming machines and can often be found instinctively licking themselves to remove dirt or smooth down their coat. If they have fleas, they will not only scratch with their hind paws but will also chew at the itchy bites and then lick to soothe the irritated skin.

All of this grooming, chewing, and licking distributes saliva and the accompanying proteins through the coat. An allergic person may then pet the dog or come into contact with shed hair and experience an allergy attack because of the saliva’s proteins.

You might not anticipate an allergic response due to a dog’s urine, but it can happen. When both male and female dogs urinate, particularly small breeds whose private parts are not far from the ground, droplets are often splashed back onto the coat. Pretty gross, right?

Some dogs aren’t too concerned with a few drops on their coat, and you would probably never be aware of the soiling. But guess what happens when you go to give your little guy a nice belly rub? Yep. You’ve been exposed. Makes you want to go wash your hands right now, doesn’t it?

Other dogs will clean themselves up if they sense a bit of moisture after peeing. It’s a nice gesture, but now the coat contains proteins from both the saliva and urine!

Although allergy sufferers can experience severe attacks when even slightly exposed, most people aren’t bothered at all by the allergens found in the dander, saliva, and urine.

The even better news is that Cairn Terriers are not only generally low-shedding, but the proteins their bodies produce are usually much better tolerated by those with allergies.

So, back to the question. Are Cairn Terriers hypoallergenic and suitable for those with allergies? Broadly speaking, yes. They tend to not produce much dander; the proteins found in their dead skin cells, saliva, and urine differ from non-hypoallergenic dogs, and they are not heavy shedders, so the amount of hair broadcast in the environment will be minimal.

How Much Do They Shed?

We’ve already established that Cairn Terriers do shed year-round somewhat, but how much can you realistically expect to deal with?

Compared to other breeds that also sport a thick, protective undercoat, Cairn Terriers really don’t shed all that much. In fact, many owners report that even after roughhousing and snuggling with their dog, they usually only see two or three hairs stuck to their clothing.

What About Seasonal Shedding?

Most dogs shed more heavily in the spring as warmer weather approaches and may experience another bout of shedding in the fall as their summer coat makes way for their warmer winter covering.

With Cairn Terriers, the spring shedding will be minimal, especially as opposed to other double-coated breeds, and a fall shed may not even be noticed.

Factors That Can Lead to Increased Shedding

Aside from seasonal shedding, there are several other factors that can cause a normally low-shedding dog to lose more hair than usual.

A trip to the veterinarian is called for if your Cairn Terrier suddenly experiences a change in shedding tendencies.

An adult Cairn Terrier’s coat consists of a rough, wiry outer coat and a softer, dense undercoat. Their double coat has weather-resistant qualities and enables them to be comfortable and protected in a wide variety of conditions. 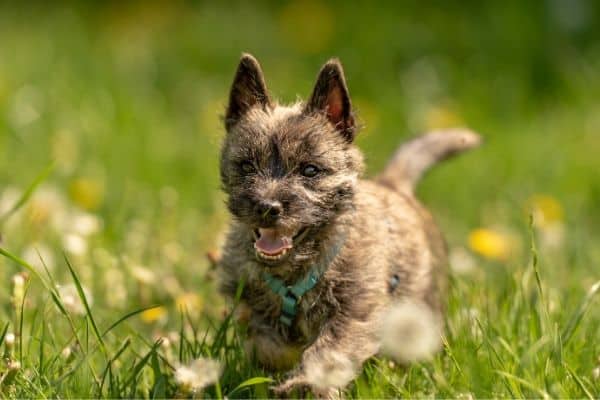 As puppies, Cairn Terriers have a coat similar in texture to an adult’s, but it’s not quite as dense and is softer to the touch. Somewhere around the 4 -6 month mark the puppy coat will gradually begin to be replaced by the adult coat. For some dogs, this process won’t be complete for several months.

Yes. While we’re not talking about endless hours of brushing here, as Cairn Terriers are a fairly low-maintenance breed, routine grooming practices should not be neglected. They are a breed that should be hand stripped a few times per year.

After all, you want your four-legged friend to remain healthy and look his best at all times, right?

A thorough brushing at least once per week removes dead hair and dander and prevents mats from developing. Brushing also increases blood flow to the skin’s surface, evenly distributes nourishing oils through the coat, and is a perfect opportunity to inspect your dog’s body for previously unnoticed injuries.

Most Cairn Terrier owners use a slicker brush over the majority of the body and a stainless steel comb for the legs and the head. The comb can also be used on the rest of the body following a brushing to ensure that no tangles or mats were overlooked.

Instead of trimming a Cairn Terrier’s coat, stripping is recommended. For those of you who are unfamiliar with stripping a coat, it involves pulling out dead hair from the roots. When done properly, it is a painless procedure and leaves the coat looking brand new.

We talk all about hand stripping a dogs coat in this article.

Stripping can be done with your bare hands, but most people prefer to use one or more tools to get the job done quickly. Tools most often used are a stripping knife, a stripping tool, a stripping stone for the chest and belly area, and rubber fingertips for quick, small jobs.

To avoid drying out the skin, bathing should really only be done when necessary or once every three months. When you do bathe your dog, be sure to use a gentle, pH-balanced shampoo for dogs and to rinse thoroughly.

Trimming your dog’s nails about once a month will prevent chipping, cracking, and painful splaying of the toes. A standard pet nail clipper will do just fine; just be mindful of the quick when cutting. Another option is to use a nail grinder if your dog doesn’t mind the hum of the motor.

Cairn Terriers have upright ears that are not particularly prone to developing infections, but it’s still a good idea to regularly check both ears for dirt, waxy build-up, or foul odors. When needed, use a mild ear cleaning solution in each ear, massage gently to distribute, and wipe away the excess with a cotton pad or ball.

Like people, dogs too can accumulate bacteria, plaque, and tartar on their teeth which often lead to infections and decay. Brushing your Cairn Terriers teeth at least two or three times every week is strongly recommended as the incidence of oral problems and disease tends to be higher in smaller breeds.

Be sure to only use a dog-friendly toothpaste as toothpaste for people usually contains fluoride and/or xylitol, both of which are dangerous for dogs.