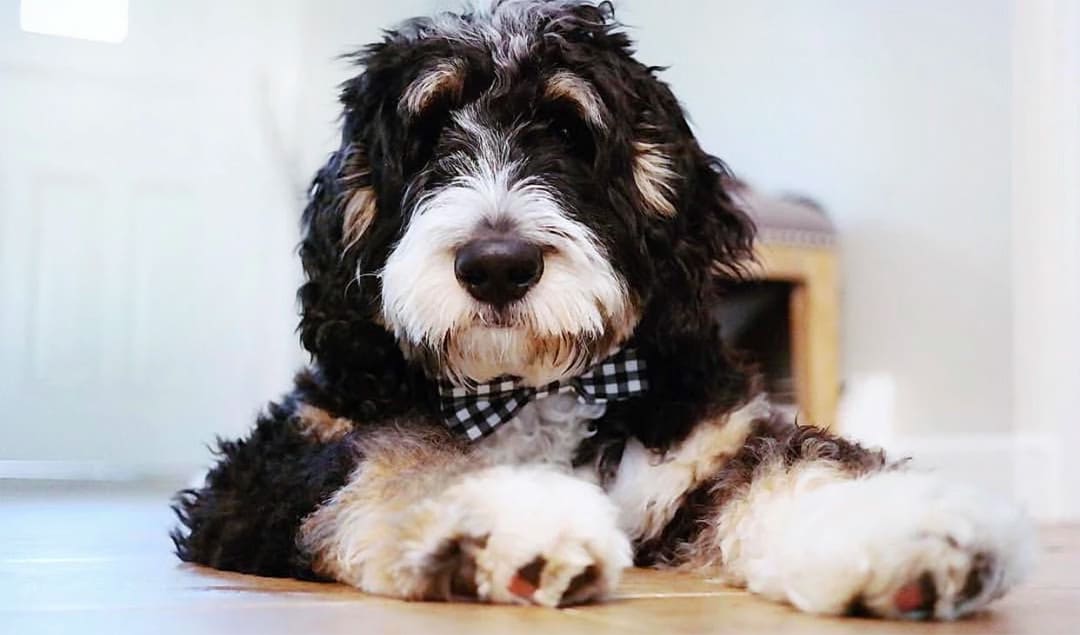 Therefore, some breeds decided to go one step further and mix the ALD with the Bernese Mountain Dog. This also created the success story known as the Australian Bernedoodle, which possesses these traits.

Getting a Bernedoodle? If you’re in the process of researching Bernedoodles, I highly recommend the book “Bernedoodles: A Head To Tail Guide”. Finding the right Bernedoodle puppy can be confusing and costly. In it, Sherry Rupke, the woman credited with creating the Bernedoodle, shares tons of info from selecting the perfect dog to choosing a quality breeder and more.

What Is The Temperament Of An Australian Bernedoodle?

The temperament of any dog comes from the breeding and how the dog is raised. It can also go back to the nature vs. nurture theory. A dog that’s given lots of loving attention and training is going to have the best temperament.

When you’re mixing together dogs that are naturally good-natured, you’re going to have an excellent chance of getting a dog with a good temperament. This is definitely the case with the Australian Bernedoodle.

Let’s take a quick look at the temperaments of all the breeds that go into the making of an Australian Bernedoodle.

Benefits Of An Australian Bernedoodle

Other Poodle Mixes To Consider

The Poodle is such a popular breed of dog with so many positive qualities; it’s hard to know where to begin. Several canine groups, including the American Kennel Club, rank them one of the most intelligent dogs in the world. Poodles are highly trainable, loyal, loving, affectionate, and playful and make great family dogs. Although Poodles shed a minimal amount of hair a little dander, they typically work really well for people who suffer from allergies.

With so many positive qualities, it’s not surprising that the Poodle is used in the creation of various crossbreed hybrid dogs other than just the Bernedoodle. Here are a few of the many Poodle mixes.

Many of the Poodle-related crossbreeds above may come in a few different varieties depending on the size and type of Poodle that is used in the mixture. For instance, when creating the Labradoodle, the breeder may mix the Lab with a toy Poodle, a miniature Poodle or a standard Poodle.

This will generally affect not just the size of the Labradoodle but also its coat and even the amount of hair it will or will not shed. These types of factors are taken into consideration when the breeder is trying to decide which size Poodle to use.

Are Bernedoodles good with kids and families?

Bernedoodles make excellent family dogs. Because Bernedoodles are so easy to train, they make good family dogs that get along well with children, adults and even elderly people. They’re very social dogs that are playful, fun, active and easy-going. Their good nature and trainability are what also makes them such good therapy dogs.

It also makes a difference if the Bernedoodle is raised around children. The more people the Bernedoodle meets as he’s growing up, the more he’s going to bond with these people. They are a very affectionate breed of dog that loves attention.

We talk more about the traits that make Bernedoodles such good family dogs in this article.

Do Bernedoodles drool a lot?

Yes, Bernedoodles have the tendency to drool a lot. It’s not unusual to have your Bernedoodle come up to you and lay a big drool-filled kiss on family members. Owners shouldn’t be surprised to find slobber all over their hands and arms just from petting this big happy dog.

If you don’t have a problem with mixed breed dogs, you want an intelligent, loving pet, and you’re tired of sweeping dog hair almost all day long, the Australian Bernedoodle may be the perfect fit for you and your family. If you have any doubts, remember how this dog was created – by taking the best traits out of several dogs and creating one almost perfect dog.