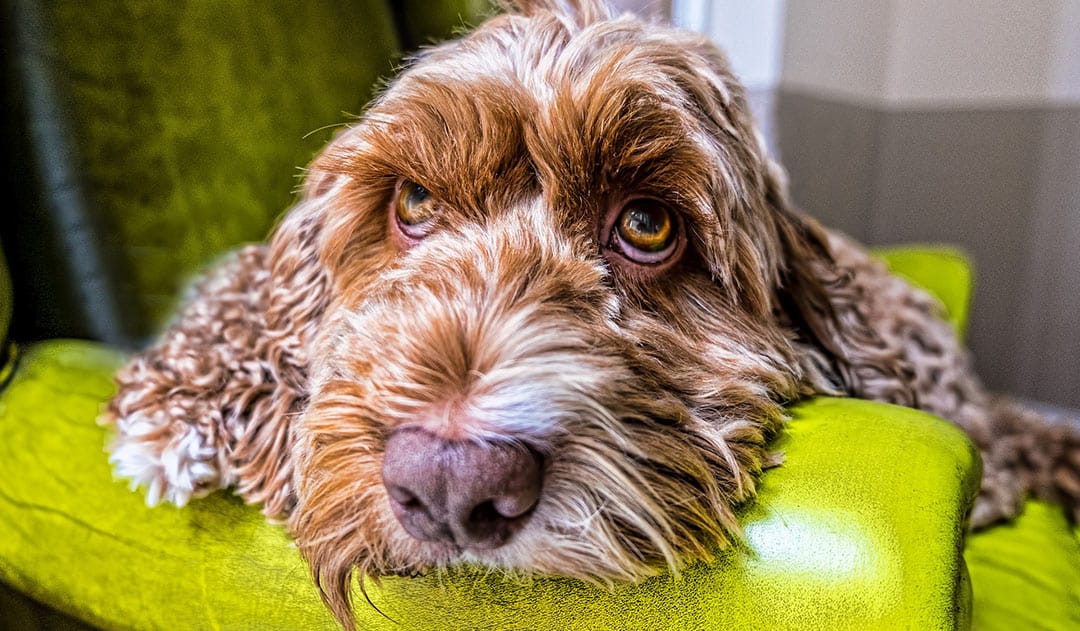 When it comes to breeding dogs, the resulting puppies are always a gamble. A breeder never quite knows exactly which parent the puppy will take after. Add to this the fact that puppies can change their coat or appearance as they grow older, and you have a confusing time of picking the puppy that is right for you. Designer breeds, like Cockapoos, can be even more confusing. Originally bred between a Poodle and an American Cocker Spaniel, the Cockapoo can possess traits from both parents. They can have high intelligence and a mostly hypoallergenic coat from the Poodle. Or they could have longer and wavier hair from the American Cocker Spaniel. They might favor the coloring of the Spaniel over the Poodle.

As a whole, Cockapoos are regarded to be friendly, loving, intelligent, and easily trainable dogs. They’re considered to be low maintenance due to their reduced shedding. Many owners end up having their dogs groomed in the Teddy Bear style, so they can be pretty adorable looking, too. Yet when it comes to choosing a Cockapoo, you’re faced with more options than you know. Do you choose the Cockapoo that came from the first generation cross between the Poodle and the American Cocker Spaniel? Or do you choose a Cockapoo that came from a second-generation cross between two Cockapoos? Or even a third or fourth generation of crossed Cockapoos? Or what the generations that are crossed back with a Poodle or an American Cocker Spaniel? All of these are factors that you need to consider when speaking with a breeder.

What generation Cockapoo is best? In terms of health and the least amount of shedding, the best generation of Cockapoo to choose is a multi-generational Cockapoo. This Cockapoo comes from a direct line of Cockapoos without any throwback or breeding back with another Poodle or American Cocker Spaniel.

Remember we are talking in broad strokes here, there are no guarantees on shedding, health, coat type or anything else.  You just have better odds at predicting the resulting traits when you know the dogs parenting, and there is some opportunity to weed out health issues.

Clearly, there’s a lot to understand about Cockapoo generations. Let’s break it down. F1 refers to the first puppy generation of Cockapoo puppies that come from a Poodle and an American Cocker Spaniel. This generation tends to see the most variation. They can either favor the mother or the father. Usually, the Poodle is the mother. Though when a Toy or Teacup Poodle is being bred, then the American Cocker Spaniel is typically the mother. This is important because breeders do tend to see that their puppies usually favor the mother.

We suggest verifying what the breeder specifies as multigenerations.  There is sometimes a bit of variance in the terms.  So basically just ask about the puppies parents and grandparents 🙂

This generation is also subject to inheriting any possible diseases or health issues from the Poodle and the American Cocker Spaniel more often than Multi-Generational puppies. As the generations move on, those health problems can sometimes be weeded out.

F2 refers to the second generation of Cockapoo puppies that were born from a cross between two Cockapoos. These can sometimes have variation, too. Throwback is when a puppy expresses genes that came from their grandparents. So, an F2 Cockapoo puppy might look more like a Poodle or an American Cocker Spaniel. In fact, they might look like more of either than their parents do. This doesn’t happen all of the time but it can happen. That being said, F2 Cockapoos may look more “Cockapoo-y” because bot of their parents are Cockapoos.

Sometimes, your breeder might tell you that the generation stems from an F2b or an F1b or an F3b and so on. This means that in the F2 cross, the Cockapoo was bred with either a Poodle or an American Cocker Spaniel. This is usually done to help balance out the features in the Cockapoo.

For example, if the Cockapoo looks a little too much like the American Cocker Spaniel and the owner wants it to look more like a Poodle than the Cockapoo might be crossed with a Poodle. Something to note about this, however, is that the puppy that comes from an F2 and F2b crossing isn’t always considered a Cockapoo. It may not be recognized by certain clubs and breeds as a true Cockapoo.

As the Cockapoos continue to be bred with one another, you keep extending the number in the F line. F3, F4, F5, F5, F7, and so on all indicate the generational breeding lines. Many breeders consider F7 to be almost a purebred Cockapoo. Though the American Kennel Club has yet to make it official.

There’s a lot of discussion over how mixed breeds are healthier than purebreds. This is largely because mixed breeds allow new genes to be introduced to the gene pool. A genetic disease is kept from being passed down. Because of this, Cockapoos are considered healthier as the more that they’re crossed with other Cockapoos. While both Poodles and American Cocker Spaniels do have health problems that they can pass on down the line, the act of mixing two different breeds helps negate some of those problems in the resultant puppy. If you then cross these two puppies, the chance of developing those health problems becomes even more reduced.

This is not to say that your Cockapoo puppy is guaranteed to be healthy if they’re an F2 or F5 puppy. As with humans, health can take a turn for the worse at any moment. There’s just a better chance that your puppy will be healthy and refrain from expressing health problems commonly found in both Poodles and American Cocker Spaniels.

There’s also the temperament of the puppy to consider. Poodles are known for being high-strung. They become quite nervous if their owner is away for a long period of time. The first-generation Cockapoo puppy may also still have this tendency from the Poodle. As that line progresses and more Cockapoo genes are mixed in, the temperament becomes more Cockapoo-like rather than Poodle or American Cocker Spaniel-like.

Considering that Cockapoos are friendly, mischievous, moderately energetic and active, and playful, that’s a temperament that you likely want to have a better chance of receiving in a multi-gen than one that is nervous and high-strung.

One note of concern, especially in terms of health, is that if enough Cockapoos do start breeding and are part of a long-line of Cockapoos, then they might achieve purebred status. This means that they are, genetically, a purebred by that point. They might face the same problems that purebreds face. Genetic diseases may arise and be passed down into the generations that come from them. However, since long-term generational breeding isn’t too popular yet, that’s a concern for another day.

Depending on what generation the Cockapoo puppy comes from, their coat may either be more like the initial parents that started the line (Poodle and American Cocker Spaniel), or they may be more of a happy mix that is prized in a well-balanced Cockapoo. F1 and F2 Cockapoos are variable when it comes to their coats. Some may have short and curly hair from their Poodle heritage while others may favor the long and wavy hair from the American Cocker Spaniel. A breeder has a difficult time in being able to tell what the result will be with these two generations.

The same goes for a generation following an Fb cross. Since they’re introducing more genes from a Poodle or an American Cocker Spaniel, there’s a good chance that the puppy will have a coat similar to that parent. However, they can’t know for sure.

Multigenerational puppies that come later down the line are a bit easier to predict. By that point, they should have a coat type that is indicative of the standard Cockapoo–slightly curly, short, and hypoallergenic.

As the Cockapoo is crossed with other Cockapoos of similar hair type, the puppies are likely to inherit that type of coat, too.

Which Generation Is the Best?

For those who want a Cockapoo that doesn’t shed a lot and is great for those who suffer from pet allergies, then you should look into a Cockapoo that comes from a long line of Cockapoos. F4 or F5 and beyond will have the hair type best for you. These are also the healthiest dogs and appear most-like a beloved Cockapoo puppy!