When it comes time to adopt a new puppy, a Dachshund is the perfect choice for many people.

These little dogs are small in size but big in personality, and they have a long lifespan, which means you have a faithful companion for many years to come.

Dachshunds come in different sizes, and those sizes have different classification names.

If you are thinking about getting a Tweenie Dachshund, it’s important to take the time to learn about the breed and its requirements.

What is a Tweenie Dachshund? A Tweenie Dachshund is a type of Dachshund whose size falls between a standard and miniature dachshund. They typically weigh between 11 and 16 pounds and stand about 6 inches high. It’s important to note that “Tweenie” is not an official term as only Miniature and Standard sizes are recognized.

If you are considering bringing a new puppy into your home and have your heart set on a Tweenie Dachshund, it’s important to know as much as possible about the breed so that you will be prepared to take excellent care of your new dog.

In the following, you’ll learn some essential information that can help you decide if a Tweenie Dachshund is right for you.

The more you know about Tweenie Dachshunds, the easier it will be to decide if one is right for your home. Here are some interesting facts about these adorable pups.

A full-grown Tweenie Dachshund is smaller than a Standard Dachshund but slightly larger than a Miniature Dachshund.

When fully grown, they should be about 6-8 inches tall. Many people prefer this size because they are small but not as fragile as the smaller classification.

At 12 months old, a Tweenie Dachshund is considered full grown and should weigh between 11 and 16 pounds. If a Dachshund weighs less, it may be a Miniature, and if it weighs more, it may be a Standard.

Tweenie Dachshunds have a very independent personality, but they also love attention and bond well with their owners. They are smart, playful, and very energetic.

The size of a Dachshund has little impact on their temperament, but small Dachshunds can be a little more skittish than larger sizes.

Because Tweenie Dachshunds are so smart, they need a lot of mental stimulation. If they aren’t being mentally stimulated, they may resort to misbehaving.

Walk your dog at least once a day, provide him with plenty of outdoor time during nice weather, and offer toys, like this hidden-treat puzzle game, and training to keep him busy. 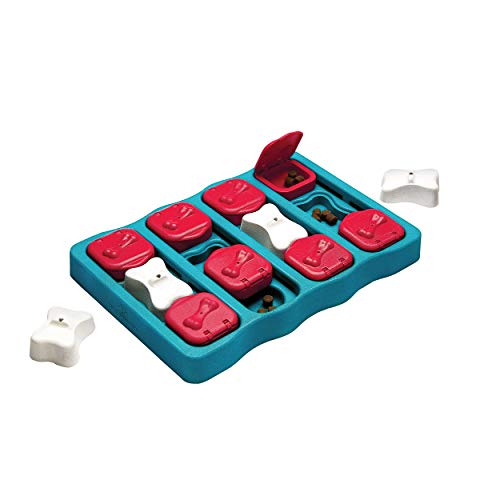 Tweenie Dachshunds are very active, so they require a lot of nutrients to stay healthy. A premium kibble or homemade diet is best.

Since they have small stomachs, they may not be able to eat a lot at one time, so it’s a good idea to offer them several small meals throughout the day.

Dachshund puppies have very small teeth, so it’s best to give them soft or moist food when they are young. Once they are about 3 months old, they can be introduced to options that are more difficult to chew.

The coat of a Tweenie Dachshund is short (except, of course, for the long-haired variety) and easy to maintain. It does require regular bathing and brushing.

The most common medical problems that Tweenie Dachshunds experience are back problems.

Because their spines are so long and low to the ground, they can suffer from intervertebral disk disease.

Because Tweenie Dachshunds are susceptible to these and other health problems, it’s important to schedule regular veterinarian checkups and ensure your dog has all recommended vaccinations.

Tweenie Dachshund’s life expectancy is comparable to that of Standard and Miniature Dachshunds, which is 12 to 16 years.

The dog’s genetics, overall health, diet, and care are all factors in its expected lifespan.

Several factors can determine the cost, including the breeder, age of the puppy at the time of purchase, the puppy’s pedigree, and whether or not you get breeding rights with the puppy.

The biggest difference between a Tweenie Dachshund and a Mini Dachshund is their size.

The Tweenie Dachshund will grow to be slightly larger (11-16 pounds) than a Mini Dachshund (11 pounds or less).

The size difference can also have an effect on their appetite, energy level, and temperament.

The AKC does not have any specific classification for Tweenie Dachshunds. They may fall into the same category as Standard Dachshunds and can possibly still be registered per these breed standards.

Is a Tweenie Dachshund the Same as a Rabbit Dachshund?

No, a Rabbit Dachshund is an unofficial classification for Dachshunds that are smaller than typical Miniature Dachshunds.

They are less than 8 pounds when fully grown and can be as short as 4 inches tall. Tweenie Dachshunds are larger, so they are not considered the same as a Rabbit Dachshund.

It is possible for two Miniature Dachshunds to produce offspring that are slightly larger than the parents and may be considered Tweenie Dachshunds.

However, it would be a rare occurrence and is not something that happens often.

When breeders are trying to produce a Tweenie, they are likely to breed a Miniature Dachshund to a Standard Dachshund in hopes of the puppies falling somewhere in the middle in size.

Do Breeders Know What Size the Puppies Will Be?

While breeders have no way of knowing the exact size a puppy will be at birth or when fully grown, they can make educated guesses based on puppies and dogs they have seen produced in the past.

In most cases, puppies grow to be the same size as their parents.

What Is a Micro Mini Dachshund?

A Micro-Mini Dachshund is a Dachshund that weighs less than seven pounds when fully grown. They are sometimes called Toy Dachshunds and even Miniature Dachshunds.

What Is a Dapple Dachshund?

Dapple refers to the spotted pattern on a Dachshund’s coat. Dachshunds of all sizes and classifications can be dapple.

Dapple Dachshunds have spots that are different in color from the overall cover of their fur. Both short-haired and long-haired Dachshunds can be dapple.

If you are ready to adopt a new puppy and have your heart set on a Dachshund, you have to decide which size is right for you.

There are different size classifications for Dachshunds, but they are basically all the same dog wrapped in different packages.

If you want a Dachshund that is larger than a miniature version but smaller than the standard option, a Tweenie Dachshund might be the best option for you.

Make sure you do your research on the breed and understand everything they require to be happy and healthy before you purchase one from a breeder.

With the right care, your Tweenie Dachshund will bring you years of love, fun, and companionship.