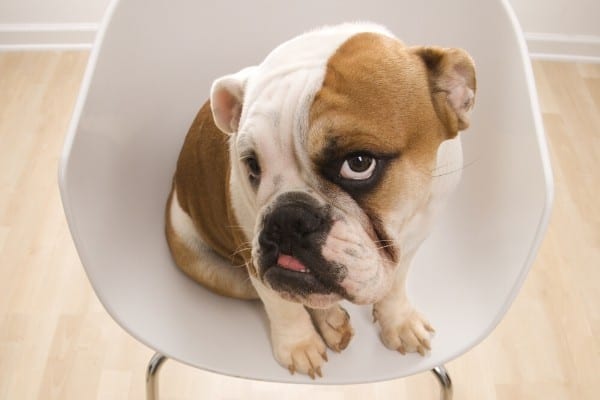 If you have ever had the pleasure of spending time with an English Bulldog, you know how incredibly charming, gentle, and laid back they are. You probably also noticed some unusual sounds and noisy breathing. Are these strange noises just a part of who they are or are they indicative of breathing problems?

Do English Bulldogs Have Breathing Problems? Due to the English Bulldog’s shortened, flat face, breathing problems are quite common. Of all the brachycephalic breeds, Bulldogs have the most compromised respiratory system and often suffer from narrow nostrils and windpipes and elongated soft palates.

Sadly, one of the English Bulldog’s most endearing characteristics, that sweet, smushed-in face, tends to lead to a variety of health complications and breathing difficulties. Let’s take a look at the more common problems experienced by Bulldogs and learn what you can do to make their lives as comfortable, rewarding, and enjoyable as possible.

English Bulldogs Are a Brachycephalic Breed

What do Pekingese, Shar Pei, Boxers, Pugs, Bull Mastiffs, Boston Terriers, Cane Corsi, French Bulldogs, and English Bulldogs have in common? They are all brachycephalic breeds and commonly experience trouble breathing. What exactly is meant by the term “brachycephalic” and why is it a problem? Let’s find out.

Brachycephalic is the word used to describe any dog with a short, compressed muzzle (nose, mouth, and jaws). The shortened noses of so many popular breeds is not a natural feature. Rather, it is the intentional result of breeders who worked with many generations to produce a desired look or feature in the breed.

Over time, these short muzzles became standardized within certain breeds. This in-demand “look” though has come at a high cost, and today, brachycephalic breeds, like the English Bulldog, suffer simply because of human preferences and interference.

English Bulldogs, and any other dog for that matter, who exhibit any significant problems with breathing, eating, or sleeping due to their compromised facial structure are said to suffer from brachycephalic obstructive airway syndrome, or BOAS for short.

While it appears that breeders were indeed successful in shortening the muzzle on today’s English Bulldogs, in actuality, only the skeletal structure of the face was altered.

The internal structures and soft tissues, however, remained basically unchanged in length and wind up being severely compressed as they are squeezed into a disproportionately small space, and this is where the trouble lies.

In fact, breathing problems in Bulldogs are so common that most people assume that snorting, snoring, and gasping for breath after just moderate exercise are normal and of no cause for concern.

However, all those funny breathing noises actually point to structural defects, and it is believed that nearly all Bulldogs suffer from BOAS in some way.

English Bulldogs are commonly plagued by the following conditions:

Stenotic nares – This is just a fancy term for very small nasal openings. Narrow nostrils restrict, sometimes severely, the amount of air flowing into and out of the nose, making each breath a labored, noisy endeavor.

Elongated soft palate – This very common condition is present in a vast majority of Bulldogs. The soft palate found at the back of the mouth separating the nasal passage from the oral cavity is often too long in Bulldogs and as a result, hangs down into the throat, flapping and obstructing the airway.

Over time, elongated soft palate often leads to secondary issues such as enlarged tonsils and pharynx, acid reflux, excessive stress on the heart resulting in heart disease, and larynx and/or bronchial collapse.

Tracheal stenosis – Also called tracheal hypoplasia, this condition is characterized by a dangerous narrowing of the windpipe, and like the elongated soft palate, is quite common in English Bulldogs. In fact, tracheal stenosis is seen more often in Bulldogs than in any other breed.

Heat stress – Because Bulldogs lack sufficient surface area in the mouth to effectively cool air during breathing, panting is rather ineffective and overheating may result. As the dog continues to pant in an effort to cool down, airways become swollen and inflamed, and the problem is compounded, and heat stroke becomes a very real possibility.

Eversion of the laryngeal saccules – Small pouches located in the larynx known as saccules can be sucked inside-out into the airway and further complicate breathing.

Paroxysmal respiration – Otherwise known as reverse sneezing, this affliction causes an affected dog to stand with his front legs braced and farther apart than normal to expand the chest and to extend his neck as he struggles to draw a normal breath. The sounds produced during an episode sound like the dog is trying to swallow a sneeze, hence the nickname.

Redundant pharyngeal folds – Excessive tissue in the esophagus often interferes with normal swallowing and can cause choking, gagging, regurgitation, and aspiration.

Aspiration – When particles of food are sucked into the airway, it is called aspiration, a condition which can lead to pneumonia. Because of the Bulldog’s compressed internal tissues, swallowing properly can be difficult when breathing in between bites is a constant battle, and food can become lodged in the lung tissue.

Any of these conditions could potentially lead to acute respiratory distress, collapse, and even death. It is imperative that you know what is “normal” for your Bulldog and be able to spot signs of trouble right away.

Special Note: Due to the physiological structure of an English Bulldog’s head and internal soft tissue, anesthesia is especially dangerous, and this breed will require testing prior to surgery and close monitoring both during the procedure and while recovering.

Of course, some English Bulldogs will exhibit only mild breathing difficulties, but unfortunately, the vast majority will experience one or more of the severe breathing problems common to brachycephalic breeds, and their ability to exercise, eat, play, and sleep normally are all negatively affected.

According to J.C. Hendricks, English Bulldogs have the most compromised respiratory system of all the short-nose breeds. Symptoms to be aware of include:

For cases in which breathing problems severely interfere with normal activities or substantially lower the dog’s quality of life, surgery is often the best course of action.

Most veterinarians will recommend waiting until the English Bulldog is fully grown before corrective surgery is done, but once the dog reaches his adult size at around the one year mark and signs of BOAS are found, the surgery should be performed as soon as possible to prevent secondary issues from developing.

While some over-the-counter medications are safe for use in dogs in certain circumstances, none are an effective treatment for brachycephalic symptoms in your Bulldog. The most OTC medications may accomplish is to temporarily mask a symptom, such as coughing, and will in no way cure the condition.

In instances in which acid reflux has developed as a result of breathing struggles, your vet may prescribe medication to manage the symptoms and prevent the stomach acid from further damaging the esophagus.

Keeping your English Bulldog comfortable enough to enjoy life should be top priority. As we mentioned earlier, you should be able to recognize when a problem arises by the change in breathing sounds or amount of effort required to draw a breath.

Here are some guidelines to follow to help avoid an emergency situation: