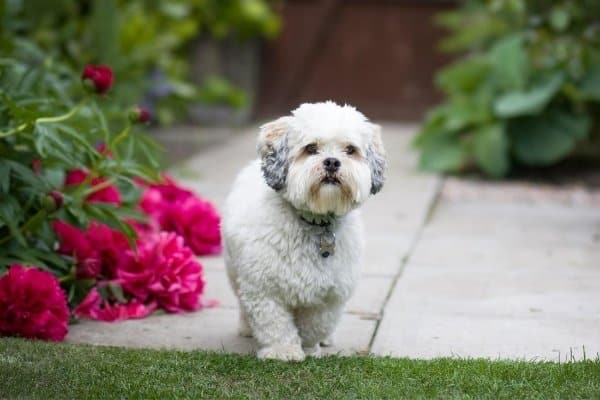 The Lhasa Apso is an ancient breed with a lot of personality and charm.

However, they have an awful lot of hair. You may be wondering whether or not there is a short-haired version available.

There is no doubt that the full coat of a Lhasa Apso is gorgeous, but the amount of work to maintain it may be too daunting for some owners.

Fortunately, you have a lot of adorable hair cuts to choose from each time you head to the groomers. The hardest part will be deciding which one to get.

The Lhasa Apso has a double coat, which means that there is a harsher guard layer and a fluffier underlayer.

The coat is heavy and straight with almost no curl or variation at all. The hair grows until it sweeps the ground.

It generally parts from the head to the tail right down the middle. The feet and legs are especially well feathered to protect them against rough terrain.

Surprisingly, based on how the dog’s coat looks, the hair is not silky, but in fact is quite hard and dense.

This coat was designed to help the dog to not only survive the harsh Tibetan winters but to be comfortable enough to stand as sentinel and watch for intruders even in the coldest weather.

Any kind of color is equally accepted in this breed, leading to a very wide variety of color options.

There are no varieties of coat in the Lhasa Apso. Every dog should carry the same sort of long, heavy coat.

Coats that are silky or woolen will be disqualified by AKC standards. The coat should always grow long and never be sparse or short.

Unless you live in the coldest climates and your dog spends a lot of time outside, he doesn’t need quite as much hair as he has.

Maintaining all of that hair is a lot of work.

You can’t allow your long-haired Lhasa Apso to go a month between grooms without him becoming terribly matted, which is very painful.

Therefore, unless you want to devote between half an hour and an hour every week to your dog’s upkeep, you will probably choose to have your dog’s hair cut.

This is by far the most popular cut for most small breed dogs with hair like the Lhasa Apsos.

This cut keeps the hair short all over the body but rounds it around the face and keeps it longer at the tail.

The result is a dog who looks trim throughout the body but has an adorable, round head that appears bigger than the body, lending a babyish appearance.

This is an extremely cute and easy-to-maintain cut. It is fairly easy for most groomers, since the majority of the work is done by a trimmer. It may not cost as much as some other cuts.

Although Poodles have curly hair and Lhasa Apsos have straight hair, this cut can still look very nice on your pup.

What many people don’t realize about the classic continental Poodle cut is that it is actually highly functional.

This cut keeps the hair longer on the legs, which is good protection if your Lhasa Apso is very active on rough terrain, and it provides warmth around the chest to protect your dog’s organs in the cold.

However, it creates a shorter cut over the rest of the body so your dog will say cool and you won’t have to worry about combing out the entire body.

If you want the continental Poodle cut for your Lhasa Apso, it will not look as well formed as it does on the Poodle, but you can still have the cut shaped to look very good on your dog.

Expect to pay a bit more for this cut, which is primarily done with scissors instead of clippers.

This cut is popular for fluffy and wire-haired terriers like the Airedale as well as for the Poodle, but it can work very well for your Lhasa Apso as well.

This cut makes the coat short over the entire body, dramatically reducing your work in maintaining it.

However, it leaves plenty of hair around your Lhasa Apso’s legs to keep joints safe in rough terrain.

It also leaves a little bit of scruff around the nose and chin to give your dog a very cute and slightly distinguished appearance.

If you want a low-maintenance cut that still takes advantage of the lush coat to protect your dog from injury, this might be the perfect cut for you.

If you want to have some fun with your dog’s hair but you don’t want to have to maintain the entire coat, the top knot style might be right for you.

Top knots are needed to keep hair out of the eyes when dogs are in full coat.

However, you can also keep the hair long on their head while clipping it everywhere else, allowing for the fun top knot style at a much-reduced maintenance.

This style is often paired with a longer tail.

This is a very appropriate cut for a dog originally known as the “Bark Lion Sentinel Dog.”

Generally, scissors are used to shape the hair so that it slopes up from the shoulders.

This look can be very fun with a Lhasa Apso, and your dog really might look like a little lion.

You will need to do some maintenance to keep the head and neck tangle free, but it is much less work than trying to maintain the entire dog.

This cut generally costs in the middle range, since the entire body can be done with the trimmers and only the head and neck need to be scissor cut.

Usually, the end of the tail is also left long to complete the effect.

This is a simple cut usually used before a dog has grown into its final coat, hence the name.

However it can also be a very convenient and simple cut for your dog.

With a puppy cut, hair is cut to uniform length with a trimmer.

It might be shaped a little bit more deliberately around the face, or that area may also be trimmed uniformly. This is one of the most affordable cuts and is also very cute.

Should You Cut Your Lhasa Apso’s Hair Yourself ?

One of the first decisions you’ll make when you bring home a long-haired breed like the Lhasa Apso is how to maintain the hair.

If you are dedicated to brushing, you can keep your dog in full coat. Just being careful to brush often and use a detangling spray if necessary.

Lhasa Apsos in full coat should be washed every two weeks and brushed at an absolute minimum of once a week.

To avoid matting as the hair dries, most people blow dry.

If you would rather cut your Lhasa Apso’s hair, you can do it at home with clippers, but you may find that it is more challenging than you expect to get a good effect.

Because the Lhasa Apso has two coats and because the hair is straight, not curly, any mistakes you make with the clippers will likely be visible.

Invest in a very high-quality clipper (this heavy-duty set is perfect) with good guards before taking on this challenge.

Be patient and give your dog plenty of positive reinforcement.

Having the coat clipped should not be unpleasant for your dog. Most Lhasa Apso learn to enjoy it as long as you do it when they’re in a relaxed mood.

There isn’t much question that if you want your dog to look their best, you’ll rely on the expertise of a groomer.

Groomers use both clippers and scissors to shape your dog’s hair and make the coat look great.