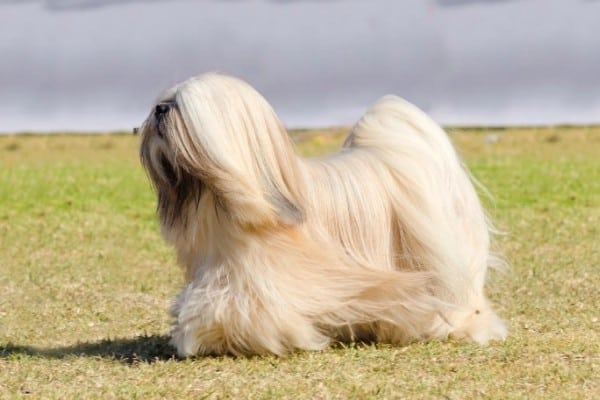 The Lhasa Apso is an adorable and ancient breed known for their association with the Dalai Lama, but equally at home as a pampered house pet.

The Lhasa Apso’s history has strong effects on their behavior today, including how much these dogs bark.

Do Lhasa Apsos bark a lot? Lhasa Apsos are natural sentinels and instinctively bark at any intruders. They do not bark frivolously, so the degree to which your Lhasa Apso will bark depends entirely on how many potential threats your dog perceives.

To help you determine whether a Lhasa Apso will be a good breed for your lifestyle, it is important to understand how much you can expect this breed to bark and what sparks the behavior.

One of the best clues to a breed’s behavior is their history. The Lhasa Apso has a unique history that accounts for a number of their behavioral characteristics, including barking.

The Lhasa Apso breed is over a thousand years old. They were developed at Buddhist monasteries and palaces in the Himalayan mountains.

In fact, they have a very strong association with the Dalai Lama.

In Tibetan folklore, Lhasa Apsos help to protect the country as the “Bearded Lion Dogs” of the mythical Snow Lion protector.

The primary job of the Lhasa Apso was as sentinel.

Lhasa Apsos haven’t changed much in the years since they guarded Tibetan monasteries.

The dogs that established the breed in America were bred and given as gifts in the late 1940s by the 14th Dalai Lama.

Therefore, you can expect the Lhasa Apso we know today to maintain many of the characteristics of the original dogs.

These dogs were initially known as the Bark Lion Sentinel dog. Therefore, it should come as no surprise that this breed is prone to barking.

How Much Do Lhasa Apsos Bark?

The degree of barking that you can expect from your dog will largely depend on how much he feels he needs to protect your property.

If you have lots of foot traffic going by your apartment or home, you can expect your Lhasa Apso to alert you to every passerby.

Some dogs may become acclimated to constant foot traffic outside, but other dogs will not overcome the instinct to bark when intruders come near.

If you live somewhere where there is little foot traffic nearby, you may find your Lhasa Apso to be very quiet.

These are not dogs who bark unnecessarily. They bark because they perceive a potential threat.

If there are no potential threats, they will not bark often. Where you live will have a lot to do with how much you need to train your Lhasa Apso not to bark.

Given their small size and relatively low energy needs, Lhasa Apsos can be excellent apartment dogs.

They are good at entertaining themselves by running around an apartment, and they excel at fun training in a small environment.

However, the tendency of Lhasa Apsos to bark at intruders may make them less appropriate as apartment dogs.

Even if you can train your Lhasa Apso to reduce his threshold for barking and to stop barking on command, he may bark at even very small stimuli and for long periods when you aren’t home.

This won’t be an obstacle if you can take your Lhasa Apso everywhere with you, but it might be problematic if you need to leave your dog home in the apartment for periods of time.

If your apartment doesn’t get much foot traffic you may not have as much of a problem.

How to Train Your Lhasa Apso Not to Bark

Lhasa Apso are not known for being exceptionally trainable dogs.

In their native Tibet, they were given a lot of freedom to move about the property as they pleased, so long as they acted as good sentinels.

They were often prone to seeking out high places where they could hear and see everything.

You may find that your Lhasa Apso likes to position himself at the top of your couch or even on a bookshelf to have a clear view of a window so that he can alert you.

It is nearly impossible to train your Lhasa Apso not to alert to what he perceives as intruders.

What you may be able to do is reduce the threshold for what he perceives as an intrusion and teach him how much alerting is required.

Reducing your Lhasa Apso’s threshold for what is a perceived threat is all about communication – trying to convince your dog that he has nothing important to tell you won’t work.

What you need to do is show your dog that you understand what he is telling you and that you are not concerned.

Most dog owners don’t mind their dog barking when someone arrives or even if they see someone very near the property.

The problem arises when your Lhasa Apso keeps barking even when it is very clear to everybody in the household and perhaps in the entire neighborhood that there is an intruder.

It is much easier to teach your dog to be quiet if you have previously taught him how to speak.

Train your dog how to bark on command before you begin training him to stop barking on command.

Once your dog understands what it means when you tell him to speak, you can then teach the quiet command.

In the midst of barking, say “Quiet!” firmly and reward immediately at the slightest pause in barking.

Acknowledge What They Are Barking At

Acknowledge what your dog is barking at so that he knows that you know what he’s trying to tell you and that he has gotten his point across.

Once you’ve given the command to tell your dog to be quiet and acknowledged his good work, call him away and distract him with a good treat or toy.

Command him to be quiet again while giving the reward so that he understands that he is being rewarded for not barking.

Make It a Routine

In time, you won’t have to give your dog a great reward or toy every time he stops barking on command. It will simply become another command in his repertoire.

If you persist in this response every time your dog barks at something that is not a threat, he will learn that these are not the sorts of things that he needs to feel threatened by.

On the other hand, when somebody does come to your door or enters your property, make sure you respond differently.

Praise your dog to acknowledge that he was correct in identifying an intruder and then call him away to give him his reward and tell him to be quiet.

Lhasa Apso generally bark at people coming into the home.

They may take a little bit of time to warm up to new people, so you may wonder whether they are good therapy dogs.

One advantage of dogs who tend to have strong home-protection instincts is that they may not take that reservation with people with them when they leave home.

Many Lhasa Apso are reserved with people coming to their home but may be very gregarious and happy to interact with new people when out and about.

Whether your dog will excel in therapy depends on his individual characteristics, but many Lhasa Apsos do very well in therapy work.

As you might expect, Lhasa Apso excel as watch dogs. If you want a small dog who can alert you to potential intruders on your boat, RV, or trailer, this might be the perfect breed for you.

These dogs are generally gregarious with other dogs, so if you want a larger dog to serve as your home protection and a smaller dog for alerting, the Lhasa Apso is an ideal pick.