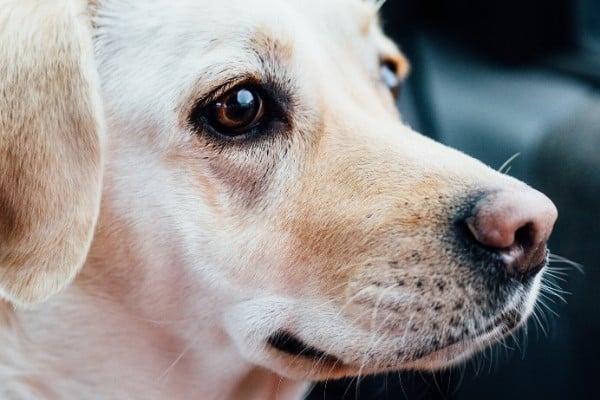 When someone learns that you have a Labrador Retriever, the question that most often follows is, “What color?” There is no doubt that Labs are the most popular choice of dog breed, and it seems as though everyone has a favorite color.

Whether Labs are black, chocolate, or yellow, they are easy to identify with their happy, smiling faces, thick otter tails, and cheerful, friendly personalities. One feature that is often overlooked though is the color of their noses.

It’s so easy to get caught up in the joy of owning a Lab that slight differences in nose color often go unnoticed until you stop to take a close look and think, “Was his nose always that color?”

Why do Labrador Retrievers’ noses turn pink? While some yellow Labs, known as Dudleys, have a pink nose due to a lack of pigmentation, others may experience their once dark noses becoming pink due to several factors including weather, age, injury, allergies, or certain health conditions.

Anytime we notice something abnormal in our dogs, we worry. That’s only natural, but for the vast majority of pink nose incidences, there’s no need for concern.

Keep reading to familiarize yourself with the possible causes of a Lab’s pink nose and to put your mind at ease.

If you’ve never heard of a Dudley dog before, don’t feel bad. Many people who have owned Labs for years aren’t familiar with the term either.

Sometimes yellow Labs are Dudleys. Simply explained, a Dudley Lab is born lacking pigment in their nose, eye rims, lips, and feet, and these areas will remain pink throughout their lives. Some breeders refer to them as Yellow NBP (no black pigment).

Although black and chocolate Labs can have lighter than normal pigmentation or have expressed dilute genes, as is the case with the silver Labs, only yellow Labs can be true Dudleys.

Although a Dudley would be disqualified in the show ring, Dudley Labs are not inferior in any way; it is just another genetic possibility in yellow Labs.

Fun Fact: Dudley noses are not unique to Labs and were first discovered in Bulldogs from the English town of Dudley, hence the name.

The loss or lightening of nose pigmentation (color) can be caused by a number of reasons, many of which are merely cosmetic and cause your dog no discomfort whatsoever. A few causes though may be of a more serious nature and require veterinary treatment.

A phenomenon called snow nose or winter nose is often noted as the days become shorter and temperatures start to drop in the early winter months.

What Is Snow Nose?

Dogs whose usually dark noses turn pink during the cold months of winter are said to have “snow nose”. It all has to do with a temperature-dependent enzyme called tyrosinase.

Tyrosinase helps to regulate the production of melanin, the substance responsible for pigmentation in the skin, hair, and eyes.

As cold weather and shorter daylight hours settle in, some dogs will produce less tyrosinase which in turn causes lower levels of melanin to be produced, often resulting in the nose leather fading to a light brown or pink color.

As spring draws near once again, more tyrosinase is produced to boost the melanin levels and protect the skin from sunburn and the damaging effects of ultraviolet rays. For many Labs experiencing snow nose, the nose will gradually return to its normal color as spring progresses.

However, for some dogs, the lighter colored nose will remain permanently.

In some affected dogs, the entire nose will become pink with just the outer edges remaining dark, and in other dogs, only the middle portion of the nose will lose pigment.

The good news is that the color change is only a cosmetic issue, and the texture and moisture of the nose remains unchanged. The affected dog feels no discomfort whatsoever, and there is no cause for concern.

Do All Labs Experience It?

Some Labs will experience snow nose every winter. Others never will, and there really hasn’t been enough research into the condition to explain why some dogs are permanently affected, some are temporarily affected, and some keep their dark noses year-round regardless of the weather.

However, snow nose is much more commonly seen in yellow Labs, and is indeed more noticeable, though black and chocolate Labs may experience a slight loss of pigmentation in the colder months as well.

Do Other Breeds Get Snow Nose?

Although this is the most common reason for a Labrador Retriever’s nose to suddenly change color, it’s not a condition only known to Labs. Though snow nose can affect any breed of dog, it is most commonly seen in Labs, Golden Retrievers, Bernese Mountain Dogs, Siberian Huskies, and German Shepherds.

Normal aging is another cause of nose depigmentation that is related to tyrosinase. As dogs age, production of tyrosinase slows, resulting in lower melanin levels and thus, lighter-colored noses and an increased number of gray hairs.

Damage to the sensitive nose leather may result in a temporary change in color. Cuts or scrapes on the nose may cause the nose to appear pink in color as the damaged area heals and new skin grows in. This color change is usually only temporary, and upon complete healing, the nose should soon return to its normal color.

Bacterial and fungal infections, like ringworm, on the nose can cause inflammation, crusty or oozing scabs, itchiness, pain, and, occasionally, discoloration of the skin. Veterinary intervention is typically needed, but treatment is usually straightforward and nose color returns to normal when the infection has been resolved.

Sometimes an allergic reaction is to blame for a Lab’s nose turning pink. Labrador Retrievers have an excellent sense of smell and use their nose to investigate everything they come in contact with.

Occasionally, a dog may investigate something that his body doesn’t respond to well, and contact dermatitis may result.

Even seemingly harmless objects such as plastic food and water bowls can cause a negative reaction in some dogs.

Although many allergic responses involving the nose cause the area to become inflamed and darker in appearance, the irritation may cause some dogs to rub the area until it becomes raw and pink. This often leads to secondary infections, so be sure to have your veterinarian look at the nose before more serious issues develop.

Labradors are not commonly affected by autoimmune disorders, but they can occur. Skin conditions such as mite infestation, allergic dermatitis, and seborrhea arise more frequently but are not likely to affect the coloration of the nose.

A rather rare autoimmune skin disorder known as vitiligo involves the destruction of melanocytes which results in the loss of pigment on patches of the body, sometimes including the nose, causing it to become pink in appearance.

While vitiligo is seen more often in Rottweilers, Doberman Pinschers, Belgian Tervurens, and Collies, it has appeared in Labradors on occasion. It can appear in humans, cats, and horses as well.

This condition, however, nearly always involves more than just the nose. If only your Lab’s nose has changed color, you can generally rule out vitiligo as the cause.

Nasal solar dermatitis, systemic or discoid lupus erythematosus, uveodermatological syndrome, and pemphigus foliaceus or erythematosus are other autoimmune disorders affecting the skin that may cause pigment loss of the nose. These conditions are, however, not very common in Labrador Retrievers.

Yes, because of the lower amounts of protective melanin present, lighter-colored noses have a greater risk of sunburn. Using an all-natural sunscreen and moisturizing balm is highly recommended every time your Lab will be outdoors for an extended period. Before applying, check to be sure that the product contains no zinc, as zinc, when ingested in even small amounts, can be toxic to dogs.