It is nothing short of amazing how many different shapes, sizes, breeds, colors, temperaments, and coat patterns (like spotted) appear in dog breeds today.

Just a brief glimpse at the complex genetics that produces such vast diversity within one species can leave your head spinning for days.

Consider all the different dog coat patterns for just a moment. Some dogs are one solid color and others are tri-colored. There are merle, brindle, and harlequin patterns as well as piebald, roan, ticked, and spotted patterning.

As if that wasn’t enough, within these patterns, there is a great degree of variation. For example, merle and ticked patterns often produce spots of color, though they will still be considered to be merle or ticked overall.

A dog with spots on their coat catches our eye with their uniqueness. No two will ever be exactly the same. Not even within the most well known spotted breed, the Dalmatian.

So, what other spotted dog breeds are there?

The following breeds regularly produce dogs with lovely spotted coats. There are, of course, many, many others.

But for the sake of brevity, we’ll only include some of the most common, with a few not-so-common breeds just for fun. 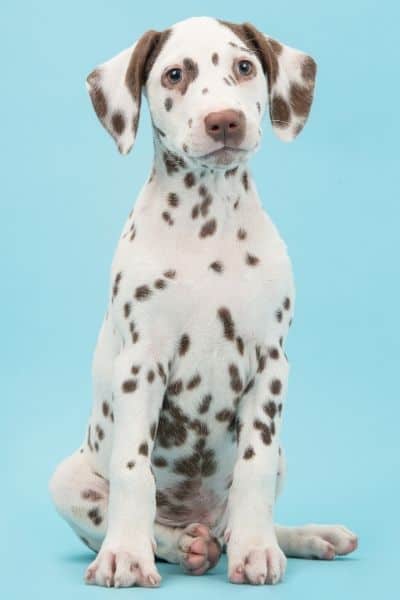 Of course, no spotted dog list would be complete without first featuring the instantly recognizable Dalmatian. The only truly spotted dog breed, Dalmatians have a brilliant white base color.

Round, well defined, dime to half-dollar size spots are evenly distributed over their entire body. This dignified dog is known for its superb stamina and protective instincts. 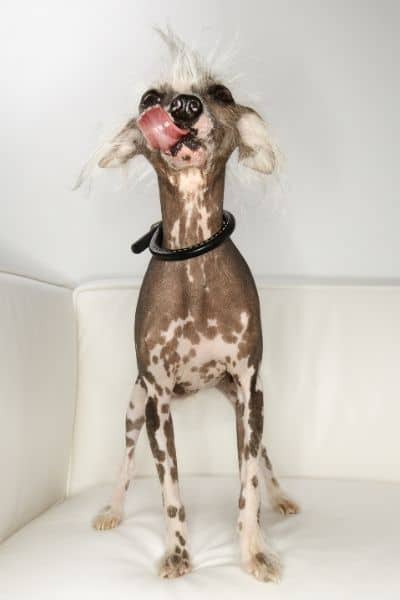 This frisky toy breed dog comes in two varieties. The hairless with tufts of hair on the head, ankles, and tail; and the powderpuff with a full, silky coat.

The hairless Chinese Crested frequently is found with white spots scattered over the body, particularly the chest region. 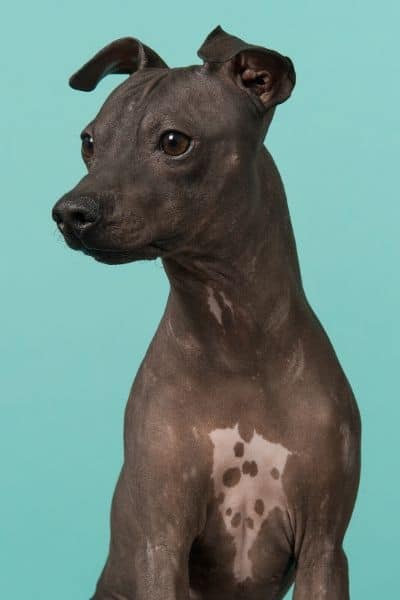 With the distinction of being the only hairless breed to have been developed in America, specifically Louisiana, the American Hairless Terrier is a descendant of Rat Terriers. Pups are born with a soft, downy coat which soon falls completely out.

Large portions of their bodies are often covered in spots, though solid colored dogs and even a coated variety are common as well. 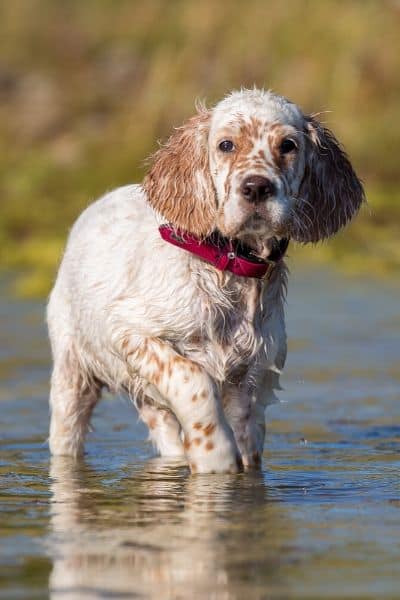 The English Setter is elegant in appearance, graceful in movement, and charming in temperament. The flat coat is beautifully feathered on the ears and lower half of the body.

Over a white base color, the English Setter is adorned with speckled patterns of spots known as belton in blue, orange, liver, lemon, or tri-color. 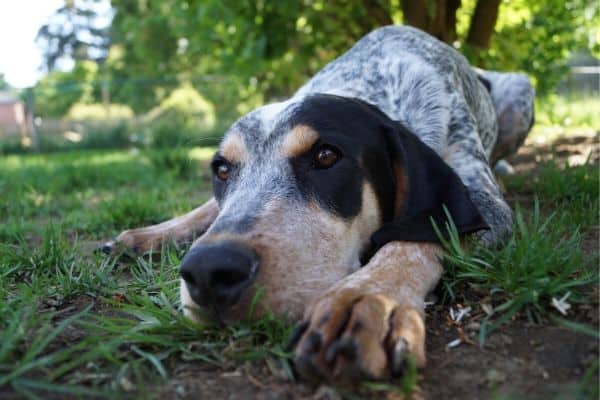 As the name suggests, a Bluetick Coonhound should be predominantly marked with dark blue ticking throughout the white coat. , except for the head and ears which should lean more toward black. The ticking is often so dense that spots result.

These baying, bawling scenthounds are still used today for raccoon hunting. But their sweet faces, affectionate nature, and floppy ears have won over the hearts of many who choose to keep them purely as a pet. 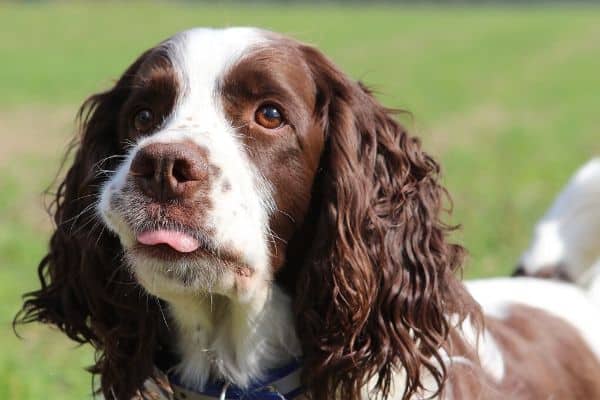 Spots are regularly seen on this bird dog breed, especially on the muzzle, legs, and chest area. These highly skilled hunting dogs have pretty feathering on the ears, legs, tail, and belly.

They have been popular family pets for many years. These pups love to be around and play with people, are great with children and pets, and are known for their good manners when raised correctly. 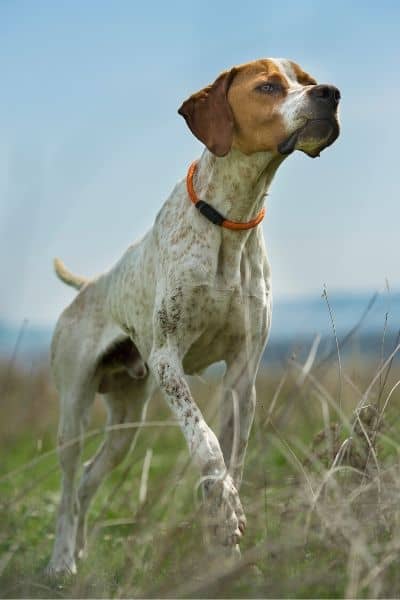 Pointers (English Pointers) are truly masters at both pointing and retrieving game. These high-energy, even-tempered dogs have hunted gamebirds since at least the 1600s.

In fact, the pointing instinct is so deeply ingrained that pups as young as eight weeks old can display the classic pointing stance. Pointers are found in varying shades of the liver, black, lemon, and orange, either solidly colored or in several different patterns with white, including spots.

This dog was originally bred to be a master at tracking, pointing, and retrieving game through fields, woodlands, and in water. They are equally suited for family life due to his high intelligence, trainability, and friendly demeanor.

This long-haired, brown and white hunting dog is often seen with closely gathered spots on the body, especially on the legs. 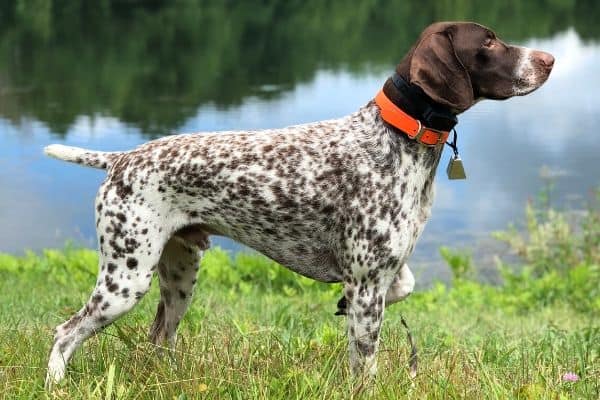 This versatile bird dog is often found competing (and winning) in competitive hunting events. Webbed feet, a sturdy body bred for endurance, and a muzzle designed for grasping and carrying fallen prey all contribute to the German Shorthaired Pointer’s distinguished reputation as a perfect all-around hunting dog.

Spots appear frequently in those with patched, roan, or ticked coats. Their close relative, the German Wirehaired Pointer, can display a spotted coat too.

This gentle, eager-to-please hunting dog from France typically has either a densely or sparsely chestnut spotted coat, though solid chestnut is acceptable too. Prized for their keen hunting abilities, this dog is thought to be the common ancestor to all modern shorthair pointing breeds.

Other French pointing breeds, such as the Braque du Bourbonnais, often feature spots as well. 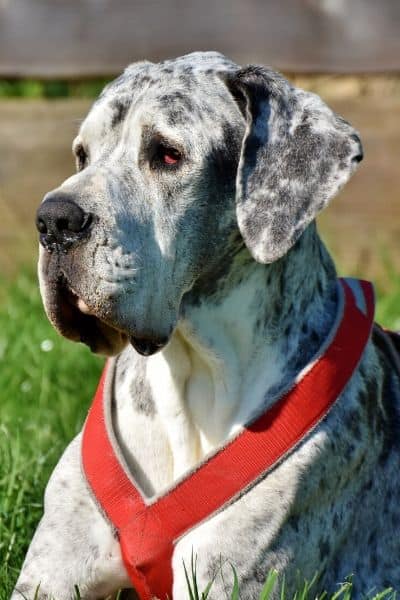 The gentle giants of the dog world, Great Danes originated in Germany, not Denmark as the name implies. These massive dogs, though sweet-natured with those they love, will willingly protect their home and family.

Individuals sporting either a harlequin or merle pattern in their coat may be covered in spots both large and small. 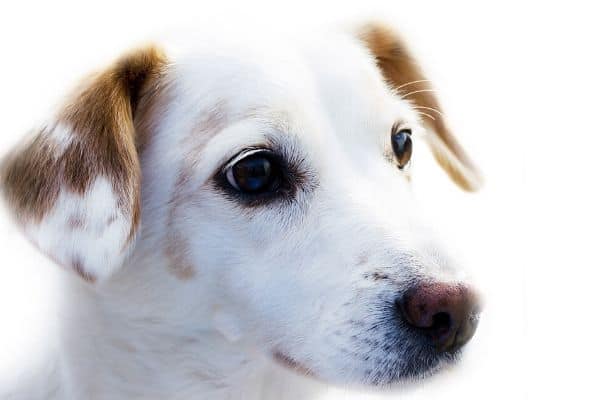 These lively, brave dogs have the typical Terrier personality and fearless attitude. Breed standard dictates that more than half of their body should be white, but many types of markings are permissible.

As a dog ages, ticking and spotting commonly begin to appear on the coat and may continue to change over time.

This pleasant and friendly dog was once used to hunt ducks and is depicted in artwork dating back to the Middle Ages. They are a medium-size breed, averaging around 25 pounds, with a lovely white coat featuring red patches and black-tipped ears.

Spots often appear on the muzzle and legs. 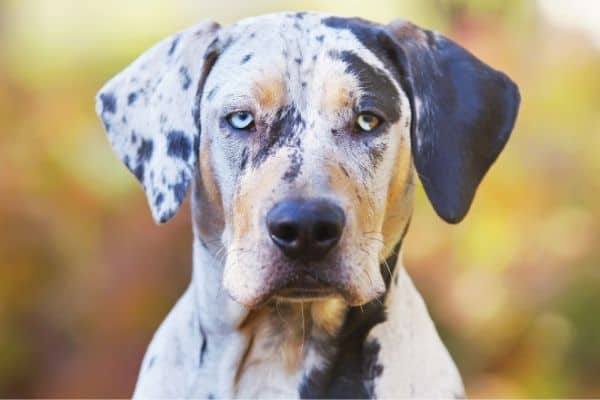 A breed developed to round up feral hogs and cows in Louisiana, the Catahoula Leopard Dog is famous for its unique working strategy. As a team, these dogs surround a targeted herd, effectively creating a living fence and hold the herd in place for their master to direct.

Spots are common in these dogs, especially those with merle markings. They can also be found on our list of dogs having blue eyes.

An interesting, though lesser-known, dog breed is the Spanish Pachón Navarro. These gundogs can range in color from orange and white to black and white and frequently appear with patches, ticking, and spots.

By far, their most notable feature is the nose with a deep cleft dividing the two nostrils giving it a double-barrel shotgun look. 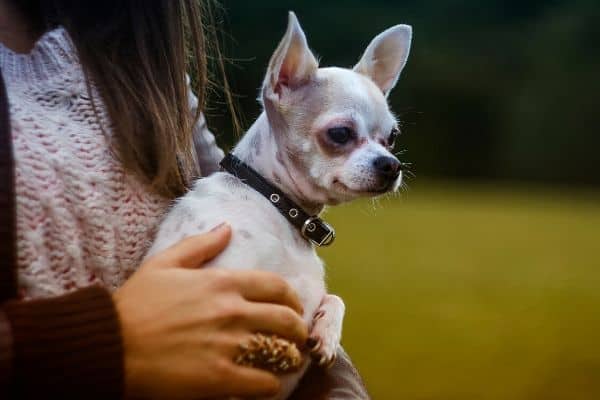 This small in stature but mighty in spirit breed comes in a long list of both colors and markings. Dogs with the spotted on white pattern feature spots and patches of color set against a white background.

Many people are surprised to learn that Chihuahuas are a very old breed thought to be descended from a breed called Techichi and refined by the Aztecs to resemble the little guys we know today.