If you see a tick on your dog, you will want to remove it as soon as possible. The longer the tick is on the dog, the more damage it can do.

There are various methods of removing a tick from a dog safely.

What kills ticks on dogs instantly? You should always remove the tick from the dog before you kill it. Applying apple cider vinegar to the head of the tick or the area of the skin where the tick is buried will cause it to release the dog so you can remove it and either dispose of it or kill it.

If you find a tick or ticks on your dog, you need a way to remove the parasite quickly but safely and then to kill it promptly. Read on to learn some fast and effective ways to kill ticks on dogs.

When ticks attach to a dog, they bury their head into the skin so they can feed on their blood. Anything you apply to the tick could be transferred to the dog’s bloodstream.

It’s always best to remove the tick from the dog before you kill it.

How To Remove a Tick From a Dog

If you find a tick on your dog, you will want to remove it as soon as possible.

You have to be careful how you remove a tick, as squeezing it or pulling it off in the wrong way could cause it to regurgitate its stomach contents back into the dog’s bloodstream and make the dog sick.

Apply a drop of apple cider vinegar to the tick, and use tweezers or a tick removal tool (this tick kit contains both) to grasp the tick at skin level.

Pull upward using firm, steady pressure. Once the tick is removed, thoroughly cleanse the area and dispose of the tick. 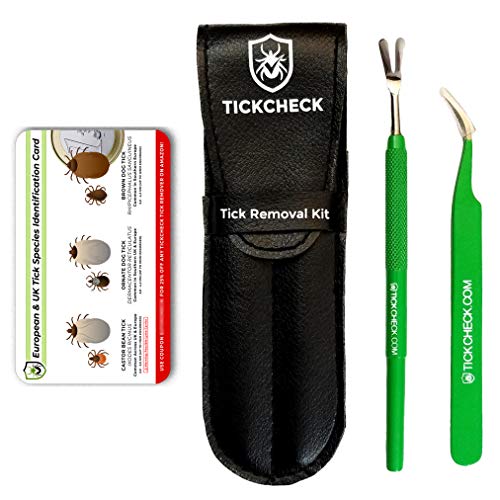 Here are some effective and safe methods for killing ticks once they have been removed.

You should never squish a tick while it is still attached to your dog’s body, but once it has been removed, you can squish it to kill it.

Just pinch it firmly between your fingers or squish between two rocks or similarly hard objects, and it should die quickly.

Be sure to wash your hands thoroughly after handling a tick.

Permethrin is a pesticide available in powders, sprays, and liquids. Its components attack the tick’s nervous system and kill it quickly.

You can spray permethrin directly on a tick once it has been removed. You can also treat areas of your home and yard with permethrin to prevent ticks.

Other pesticides that work the same way include Bifenthrin and Fipronil.

Alcohol can quickly fill up the lungs of a tick and kill it instantly. It can also help remove any germs that may be on the tick’s body.

Once the tick has been dropped into the alcohol, be sure to dispose of both the tick and the alcohol so it is not accidentally reused.

Applying a drop of dish soap directly to the tick can kill it quickly. The dish soap prevents the tick from breathing and causes it to suffocate quickly.

Nail polish is thick enough to cover a tick completely. It will prevent it from moving and kill it quickly by replacing the air the tick needs to breathe.

Dealing With Ticks on Dogs: What NOT To Do

If you notice a tick or multiple ticks on your dog, you will want to remove it (or them) as soon as possible.

There are some things you should NOT do when attempting to remove a tick from your dog.

Never squeeze the body of a tick. Ticks are often engorged with blood and may appear very large. When the blood enters the tick’s stomach, it mixes with bacteria and other things.

If you squeeze the tick’s body while it is still attached to your dog, it could cause the tick to regurgitate the blood and bacteria back into your dog’s bloodstream and make the dog sick.

If you pull too hard on the tick, you could actually pull its body from its head.

This could cause the contents of its stomach to release into the dog’s bloodstream and may leave the head of the tick embedded in the dog’s skin.

The head may be difficult to remove and could cause a serious infection.

There are many chemicals and treatments that can kill ticks, but it’s best to remove the tick before you kill it.

Applying chemicals to the tick could also expose your dog to the chemicals and make him sick.

How To Prevent Ticks on Your Dog

While most dogs will encounter ticks at some point in their lives, it is possible to prevent a tick infestation. Apply all of the following tips to keep your dog safe.

If you happen to pull a tick off your dog but the head stays in the skin, you should use a pair of tweezers to try to remove the head.

If you cannot remove the head, you should apply a triple antibiotic to the area and cover it with a bandage. Check the area often to see if the body has rejected it.

If the area looks red or infected at any point, take your dog to the veterinarian.

Vinegar does not kill ticks, but it can help irritate ticks that have dug into a dog’s skin and cause them to release their grip on the dog.

This makes it easier to remove the tick and dispose of it or kill it.

How Long Do Ticks Stay on Dogs?

Once a tick is attached to a dog, it will feed for several days until eventually becoming engorged and falling off. The longer the tick stays on the dog’s body, the bigger it will become.

If the tick stays on the body for a long period of time, it could lead to anemia and a greater risk of infection.

Always disinfect the area where the tick was attached and use preventative methods to ensure your dog is less likely to have a tick infestation.