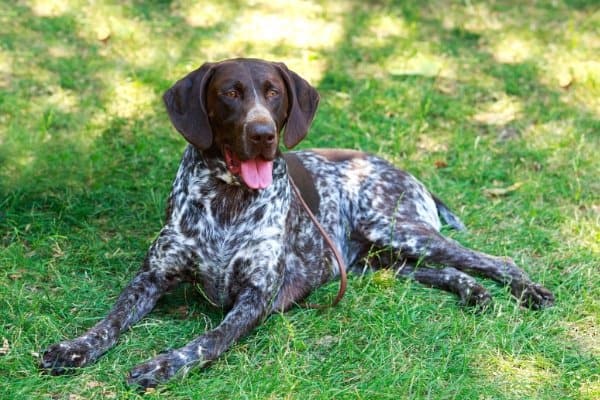 The German Shorthaired Pointer is a stunningly beautiful dog and a superb hunter, but how are they as family dogs?

The German Shorthaired Pointer may be a great family dog for you, but they aren’t right for every family.

If you’re thinking of incorporating a German Shorthaired Pointer into your family, there are several aspects to this breed of which you should be aware before making a final decision.

Provided they get enough exercise, engagement, and training, the German Shorthaired Pointer can be a wonderful, affectionate family dog.

The entire family should be involved in caring for and training this dog so that he will be responsive and well behaved with everyone in your family.

The German Shorthaired Pointer’s responsiveness to their owners, affection, and loyalty can make them wonderful family dogs.

A GSP can be a child’s best friend from infancy into adulthood, provided the right restrictions are in place and the family is committed.

These versatile hunting dogs were bred to be great family companions as well as all-around high-quality hunters.

They were bred to run in the field all day and lie at the owner’s feet at night. For this reason, the majority of German Shorthaired Pointers have a very pleasant temperament.

They are agreeable dogs to be around, provided they have plenty of exercise.

Meeting their exercise needs is critical, but many people (and their dogs) quickly grow bored with the same routine day after day.

The intelligent GSP will appreciate a change of pace every so often to hold his interest and keep him engaged.

Be sure to read our complete exercise guide for interesting ways to help your dog burn off excess energy and stay fit and trim.

Are German Shorthaired Pointers Good With Kids and Babies?

The soft floppy ears and beautiful colors of the GSP are very endearing to children, but are German Shorthaired Pointers as fond of kids as kids are of them?

In general, this breed is known for being wonderful with children and rarely showing aggression.

For the most part, potential problems with the GSP are more likely to come out when kids are growing rather than when they are very small babies.

There are a few essential things to be aware of about the GSP and kids.

The GSP was bred to hunt a wide range of prey, from birds to small mammals and even larger prey like deer.

As pointers, these dogs are attentive, focused and driven to point, rather than chase and nip.

However, some individuals may express their prey drive differently. Some GSPs tend to chase and nip children, especially when kids are running.

These are big, active dogs. Some seem to be very aware of their bodies and conscious of not knocking children over, while others act like big puppies long into life, oblivious to sending little kids flying.

Dogs who get plenty of exercise may be calm and well behaved at home, but some individuals seem to have almost endless energy.

Although not considered a giant breed, the GSP is heavy and tall enough to do some damage when they start jumping around, and there’s a real danger of them knocking children over and hurting them.

This issue could be compounded if you’re raising your GSP in an apartment or small house with your family.

A well-trained GSP will point at, not run after, prey, but even well-trained dogs may lose control if they see potential prey on a walk.

If your child is trying to walk this powerful dog when the dog decides to chase after something, they can be pulled over and lose control of the dog.

Are German Shorthaired Pointers Good With Other Pets?

The GSP and Other Dogs

In general, the GSP is a gregarious dog who gets along well with other dogs.

They do well in households with several dogs and are playful and good-natured with other GSPs as well as other types of dogs.

GSPs were developed to be farm dogs. They were used for hunting, but they often coexisted with other types of farm dogs, like herding dogs and ratters.

As long as the GSP is raised with other dogs or introduced carefully, the majority of them get along well with all sorts of other dogs of various sizes.

That said, some GSPs who have a very high prey drive may see other dogs as prey, especially dogs that are smaller than they are.

Some GSPs behave differently inside than they do when they are running around outside.

Keep an eye on your GSP when he interacts with other dogs, and be wary of behaviors like pointing or excessive focus.

Stop a GSP who is chasing a dog down with more serious than playful intent.

When raised together with cats who are confident and stand their ground, most German Shorthaired Pointers get along fairly well with cats indoors.

However, it may be a very different story outdoors, even with the same cat.

German Shorthaired Pointers who get along well with household cats may still try to chase strays.

The instinct to chase small fluffy animals that move in a way similar to how cats move is deeply ingrained.

It is best to never leave a German Shorthaired Pointer alone with the family cats and always to provide cats somewhere that they can get away from the dog, such as a tall climbing post.

If a GSP has never been socialized with cats, the chances are that he will feel the instinct to chase any cat that runs.

Such dogs can still be socialized with very confident cats, but this should only be done with caution and constant supervision.

Small pets like rabbits, guinea pigs, hamsters, etc. are generally unable to live safely with a GSP, even if they are raised together.

There are, of course, exceptions to this rule, but in general, the instincts to pursue prey like these animals is too overwhelming for a German Shorthaired Pointer.

This is precisely the sort of prey that these dogs were bred to hunt.

Even if they learn to live peacefully with them, they’re likely to be obsessed, constantly following them around.

Because these prey animals are very conscious of being followed around by a large predator, this can lead to a stressful existence, even if no violence occurs.

The German Shorthaired Pointer was often a farm dog who had to live with the family’s flocks of chickens, geese, and ducks successfully.

However, these dogs were also bred to hunt and point birds. Therefore, the GSP has a somewhat convoluted relationship with birds.

In general, as long as a bird is in its cage or pen, a GSP can be taught not to bother it.

Your dog may still be obsessed with the bird and want to stare at it, but many house birds and chickens are less bothered than this than small rodents are.

Never allow your GSP to interact with a bird without barriers between them. This may be too overwhelming for many dogs and stressful for the bird.

As a farm dog, the GSP often needed to live around various kinds of livestock like horses, cattle, etc. However, the GSP was also bred to hunt large game like deer.

For the most part, your GSP can learn not to bother livestock that is in its pen, but if your dog is loose with livestock he may want to chase them.

This is especially true for small, frisky livestock, like goats and young animals.

Some dogs can be trained to ignore livestock completely, while others will remain focused. Some dogs remain dangerous to livestock despite training.

It is better never to trust your GSP alone with any livestock in a pen that is accessible to the dog.

The German Shorthaired Pointer and Strangers

Most German Shorthaired Pointers have a rather threatening bark that they aren’t afraid to use when new people come to the house. Very few of these dogs have a bite to back up that big bark.

In general, the GSP is a wonderful dog to have around friends and extended family and not a dog that you’ll have to lock up when people come over.

However, their bark is menacing enough to deter strangers from entering your property without permission.